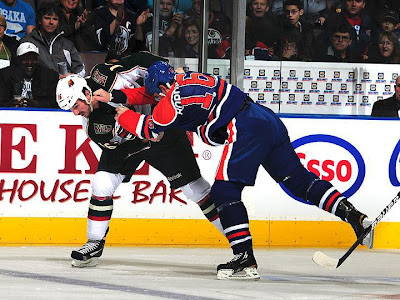 Last week the Edmonton Oilers were finally able to end their seventeen game losing streak against the Wild, in Minnesota. Unfortunately for the Oilers, the Wild have started a new streak of sorts, after beating the Oilers for the third time via the shootout. This time by a score of 3-2. Former Oiler Kyle Brodziak, scored the winner in the shootout after notching his sixth of the season in the second to tie the score at two. Ryan Nugent-Hopkins and Jordan Eberle led the way for the home side, with a goal and an assist each

Edmonton opened the scoring at the 9:58 mark, when Nugent-Hopkins notched is eleventh of the season on a gorgeous cross ice pass from defenceman Andy Sutton. The Oilers managed to stretch the lead to two when red hot Jordan Eberle, scored his ninth of the season on the power play. Eberle took a feed from RNH and deposited a quick back hand past Minnesota netminder Niklas Backstrom. Twenty five minutes in, everything looked good for the home side but that would soon change.

Just past the eleven minute mark, former Shark Devin Setoguchi brought the visitors to within one. Tom Gilbert's poor outlet pass was intercepted by Dany Heatly and two quick passes later, the score was 2-1. Four minutes later, Brodziak tied it at two with his sixth of the season, on the power play.

Over the final twenty minutes and overtime, both teams had chances to take the lead but Backstrom and Nikolai Khabibulin shut the door and the teams found themselves heading to a shootout, for the third time in four meetings.