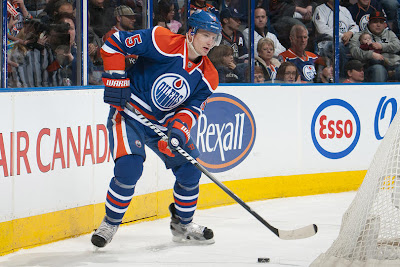 With the Edmonton Oilers loss to the Vancouver Canucks on Saturday night, it brought to an end another season of disappointment in Oil Country. While there were many positives on individual fronts, as a team the 2011-2012 campaign would have to be deemed as a failure. With the season now completed, the time has come to look back and give out my year end report cards. Each player's rating is based on their performance from opening night and takes into consideration the role in which every player was expected to play, heading into the season. Today the focus is on Edmonton's goaltenders and defencemen, while tomorrow I'll examine the forward group.

Devan Dubnyk: GP - 47  Record: 20-20-3  GAA - 2.67  SV% - .914
The twenty-five year old carried the Oilers over the final three months of the season and finally started to prove that he just might have what it takes to be a true number one starter in this league. While Dubnyk struggled when given the opportunity as the guy early on, his strong play over the final half of the season is a great sign moving forward. He now needs to show that he can do it from the start of the year and not just play at this level when the team's season is essentially over and there is no pressure...which is exactly what he has done in the last two seasons.
Grade: B

Nikolai Khabibulin: GP - 40  Record: 12-20-7  GAA - 2.65  SV% - .910
The fact that Khabibulin won only one game after December 22nd clouded the judgement of many when it came to examining the veteran's performance this season. His year was the complete opposite of Dubnyk's campaign. The Russian netminder was one of the best puck stoppers in the league over the first six weeks of the season and at times, earned this team points they had absolutely no right at ever thinking of collecting. Having said that, once the calendar year turned it was completely different story. I was one who fully expected Nikolai to rebound and prove he still had something left in the tank and when you look at his stat line, it's hard to argue that he doesn't. If not for the lengthy losing skid to close out his campaign, he would have received the same grade as Dubnyk.
Grade: C

Cam Barker:  GP - 25  G - 2  A - 0  Pts - 2  Plus/Minus  0  PIM - 23
While Barker's play early in the season wasn't anything to write home about, the Oilers struggled badly after Cam broke his ankle in early November. While he remained out of action until early February, the talented D man was absolutely awful in his return to action. So much so, that he was a regular healthy scratch over the final six weeks of the season. Edmonton decided to take a chance on the former Chicago Blackhawk standout but the move turned out to be nothing more then an exercise in how to not spend ones' money.
Grade: F

Theo Peckham: GP - 54  G - 1  A - 2  Pts - 3  Plus/Minus  0  PIM - 80
After becoming a regular during the 2010-2011 campaign, the expectation was for Peckham to continue to improve and ultimately become a solid bottom pairing NHL defenceman. Unfortunately for Theo, he was unable to recover from an absolutely horrendous start to his campaign and it simply snow balled on him. Be it the inconsistency in his play or the inability to make sound hockey decisions on the ice, this year was definitely a step back for the rugged blueliner.
Grade: D

Jeff Petry: GP - 73  G - 2  A - 23  Pts - 25  Plus/Minus  -7  PIM - 26
After starting the season as nothing more then a bottom pairing guy, Petry was forced into playing major minutes after Tom Gilbert was sidelined due to injury and the youngster took full advantage of his opportunity. While he struggled when he was first placed into a more prominent role, the second year D man was outstanding after being paired with Ladislav Smid. It all seemed to click for the twenty-four year old blueliner, as he started to chip in offensively and become somewhat of a physical force in his own end. Petry looks to have the high end game that should see him develop into a solid top four defenceman, if not a top pairing guy.
Grade: B+

Corey Potter: GP - 62  G - 4  A - 17  Pts - 21  Plus/Minus -16  PIM - 24
Potter came out of nowhere to start the 2011-2012 campaign and it looked as though the Oilers had found themselves a diamond in the rough. However, as the season progressed the career minor leaguer's game started to show signs of weakness. While Potter was fairly consistent on the man advantage, he was down right scary in his own end. He continually found himself out of position and is a tough sell to be considered as anything other then a depth defenecman. Edmonton signed Potter to a two year contract extension during the season and if he used in a number six/seven role, the twenty-eight year old blueliner will end up being a solid signing.
Grade: C-

Nick Schultz: GP - 20  G - 0  A - 4 Pts - 4  Plus/Minus -2  PIM - 10
Edmonton acquired the veteran defenceman in exchange for Tom Gilbert at this year's NHL trade deadline and he has been exactly what the Oilers needed. This blueline badly needed a stabilizing force to be brought in to help out on the backend and Nick has fit the bill perfectly. Considering he was brought in with only twenty games left, this was nothing more then an audition and a very impressive one to boot. Schultz should be used in a four/five role next season, while playing a major role on Edmonton's penalty kill.
Grade: B


Ladislav Smid: GP - 78  G - 5  A - 10  Pts - 15  Plus/Minus  +4  PIM - 44
While everyone had hoped to see Smid develop into a solid NHL defenceman after being acquired in the Chris Pronger deal, there was some serious doubt if he would ever reach those lofty goals. After his warrior like performance during the 2011-2012 campaign, the Czech blueliner has erased any doubt as to if he would turn into the quality NHL defencman that many thought he would be. Smid was a horse all year long on the Oilers backend and was among the league leaders in blocked shots, while also leading the club in hits and all defenceman in goals scored. Simply put, Smid was outstanding.
Grade: A+

Andy Sutton: GP - 52  G - 3  A - 7  Pts - 10  Plus/Mins  +5  PIM - 80
Heading into the season, I wasn't expecting much from the veteran blueliner and he was frankly far better then I thought he would be. While he was fairly solid in his own end and relished the role of being the veteran leader on the backend, Sutton is what he is. His foot speed is a major concern and for a big man, he doesn't mix it up nearly as much as he should.
Grade: C

ColtenTeubert: GP - 24  G - 0  A - 1  Pts - 1  Plus/Minus  -5  PIM - 25
While the youngster played far more games this season then anyone had envisioned, he did show signs of what he could be possibly do down the road but he is clearly not ready to play at this level. While he can more then handle himself when it comes to the physical side of things, his foot speed and decision making abilities are a concern. Another full year for Teubert in Oklahoma City looks to be in order come 2012-2013 but after that, he will likely get his chance to see if he has what it takes to be an NHL regular.
Grade: C-

Ryan Whitney: GP - 51  G - 3  A - 17  Pts - 20  Plus/Minus  -16  PIM - 16
While everyone hopes Whitney is capable of returning to his pre-surgery form after having a full off season of training to build the strength in his ankle/foot, it is far from a guarantee that it will actually happen. In fact, it almost seems more likely that the veteran puck mover may never reach those heights again. It was no real surprise that Ryan struggled in his return to the lineup but the drop in his overall mobility is rather alarming. He was regularly being blown past by opposition players on a nightly basis and while I expect him to be better next season, I can't see him coming all the way back at this stage of his career. He could potentially change his game and become a different defenceman but if he does that, is he still the defenceman the Oilers need moving forward?
Grade: C-
Posted by Oil Drop at 9:26:00 am