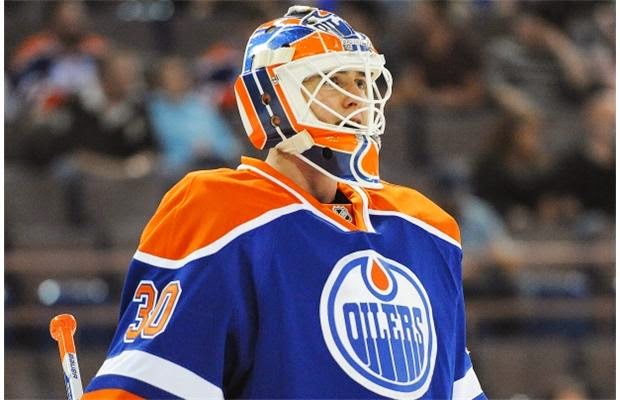 It almost felt as though we had seen this movie before. For the second consecutive year, the Edmonton Oilers delivered a dominating performance during their season opener and for the second consecutive year they ended up on the wrong side of the scoresheet courtesy of their netminder’s inability to make that timely stop all teams need.
Mason Raymond was the star of the show, scoring a hat-trick in just his second game as a member of the Calgary Flames, but Ben Scrivens allowed three goals on the first fifteen shots he faced and that proved to be the difference in what was 5-2 loss for the team wearing Orange and Blue. Taylor Hall and Teddy Purcell managed put pucks in behind Karri Ramo but the Flames netminder was outstanding in earning the win.
While Scrivens fought the puck for much of the evening, the Finnish puckstopper improved as the game moved along and ended up stopping thirty-eight of the forty pucks fired his way and many were of the timely variety. To their credit, Calgary made the most of their opportunities and used a bit of “puck-luck” to their advantage to jump out to an early two goal lead.
However, Dallas Eakins’ side wasted little time in bouncing back from what were a couple of egregious errors in their own end and proceeded to thoroughly dominate the opening forty minutes of play. While Purcell cut the lead in half with a power play marker at the 12:59 mark of period one, Hall would get them back on level terms courtesy of yet another goal on the man advantage midway through period number two and just like that all the momentum was on the Oilers side.
Heading into the second intermission, Edmonton held a 25-11 advantage on the shot clock but it would be the Flames who would break the deadlock on shot Scrivens absolutely has to stop. Just as Devan Dubnyk allowed the Winnipeg Jets to stick around in last season’s opener and eventually take home two points they had no business collecting, the Spruce Grove native did the exact same thing on Thursday night at Rexall Place.
Defenceman Mark Fayne did not have a debut to remember, coughing up the puck on the Flames second goal and was made to look pylon-like on what ended up becoming Raymond’s third goal of the night. The former New Jersey Devils blueliner was an ugly -3 on the night and appeared to be growing more and more frustrated as the game moved along.
Having said all of that, it was not all doom and gloom for the Oilers, as they pushed the play for much of the game and generated chances but again at some point, this team has to find a way to put pucks in the back of the net when the game is on the line. In the grand scheme of things, we are talking about the first game of what is an 82 game schedule but to be fair, this fan base has seen this song and dance on more than one occasion over the last number of years.
Jeff Petry was arguably Edmonton’s best defenceman, playing just a shade under eighteen minutes and was the only blueliner to finish the game without a minus beside his name in the box score. Considering he was playing his first game of the year, his performance was awfully impressive and he should only get better from here.
It certainly was not the start the Edmonton Oilers or their fans were hoping for but at the end of the day, this group has to put this behind them and ensure they are ready to go on Saturday night in Vancouver. While falling to the Canucks and dropping to 0-2 to start year may not be the end of the world, the last thing this group needs is to have a potential losing streak snowball on them to start the year.
Posted by Oil Drop at 11:43:00 pm