Stanley Cup Preview - Will Quick or Brodeur steal the show? 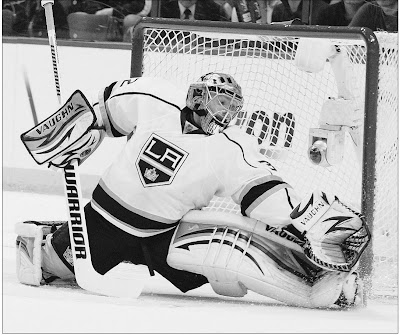 In what will be a Stanley Cup Final in which few, if any, thought might eventually materialize, it appears as though it will come down to what it often comes down to at this time of year...goaltending. New Jersey brings three time Cup winner and all time wins leader Martin Brodeur to the table, while the Los Angeles Kings counter with arguably the best netminder on the league this year, in Jonathan Quick. Both men have been stellar though the post season but which one will carry their team to the ultimate prize? While the experience and intangibles are clearly on the side of Brodeur, look for Quick to be the difference maker  at the end of the day.

There isn't a whole lot to choose between the two puck stoppers when it comes to this year's playoffs. Brodeur has gone 12-5 in 18 appearances with a .923 SV% , 2.04 GAA, in leading the Devils to the finals. While his counterpart at the other end of the ice has been even better, taking the Kings back to the finals for the first time since 1993. The American netminder is a sparkling 12-2 over the opening three rounds, with a ridiculous 1.54 GAA and .946 SV%. With both teams playing their best hockey heading into the finals, it looks as though whichever one of these men blinks first, will likely end up on the wrong side of the ledger at the end of the series.

While Quick has proven to be a legitimate NHL starter over the previous three seasons in Los Angeles, the young goaltender took his level of play to a whole different level during the 2011-2012 campaign. Among goalies who played at least forty games this season, the Kings MVP lead all goalies with a 1.95 GAA and his .929 SV% was just behind the .930 mark that leaders Henrik Lundqvist and Mike Smith shared. Add to that, the fact he also led the league with ten shutouts and help Los Angeles opponents to two goals or less in 48 of his 69 appearances and his season looks even more spectacular. If the Kings would have actually scored him the odd goal during the first half of the season, he may very well have made a push at Brodeur's all time mark of 48 wins in a single season. Pretty heady stuff for a guy who many felt, myself included, would have lost his staring job to current backup Jonathan Bernier.

It is clear that the Kings feed off the play of the twenty-six year old tender and seem willing to do almost anything to pick up their teammate, on the rare occasion he lets them down or makes a blunder. Perfect example being the 100 foot blast from Phoenix Coyotes defenceman that beat Quick in the opening game of the Western Conference Finals. Instead of allowing the bad goal to get them down, it seemed to have the opposite effect. Make no mistake, his teammates realize how important he is and has been to their success.

In Brodeur, the Devils have the wily veteran who has been down this road many times before. After an average regular season, the now forty year old netminder has rebounded nicely with a strong post season performance. While he has allowed the odd weak goal to sneak by him throughout the playoffs, Marty has still displayed the ability to make the big save at the right time. His game is nowhere near the level it was in his prime and the Devils play nothing like the did back in the day. That being said, the experience and composure the netminder brings to the table simply can not be mearsured.
Posted by Oil Drop at 1:44:00 pm