Oilers Player Preview: Eberle on the verge of becoming NHL's next elite sniper 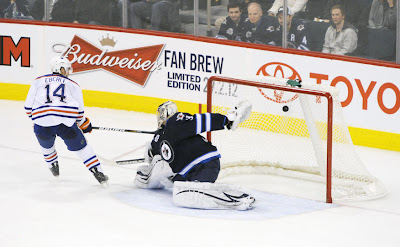 Following what was a superb sophomore campaign from Edmonton Oilers forward Jordan Eberle, some were wondering if the twenty-two year old had perhaps hit his peak, with his thirty-four goal, seventy-six point campaign during the 2011-2012 season.

With the performance the young man has managed to put together during his thirty-four game stint as a member of the Oklahoma City Barons, the native of Regina Saskatchewan has surely silenced those who felt that we may have already seen the best of what #14 had to offer.

Eberle is heading back to Edmonton, as not only the American Hockey League's top marksman with twenty-five goals but also its leading scorer, with fifty-one points. Those who were questioning his chances of eclipsing his 2011-2012 totals, pointed to his fantastic 18.9% shooting percentage, as an unrealistic number for the young Oilers sniper to maintain.

With that being the case, all Eberle has managed to do down in Oklahoma City, is fill the net at an even better clip.

Through his thirty-four games in a Barons uniform, the former Regina Pats standout has clicked on 23.6% of his 106 shots on goal. Some will suggest that number is what it is because he is facing AHL quality competition. There is likely something to that but at the end of the day, a sniper is a sniper and Eberle has proven he can score at every level.

Add to that, the chemistry he has already developed with Ryan Nugent-Hopkins and Taylor Hall and an on ice connection with defenceman Justin Schultz, that may actually end up rivaling the one he has formed with RNH, and it seems almost impossible to think Eberle will not push the forty goal plateau on a yearly basis.

Having already played a large chunk of the AHL campaign on a line with one or both of Hall and Nugent-Hopkins, it is almost a 100% guarantee that new bench boss Ralph Krueger, will turn to his trio of youngsters, as the club's undisputed top line. In the few games in which he took the lead role behind the Oilers bench in 2011-2012, Krueger showed little hesitance in feeding his top players extra ice time.

Something which can only help Eberle, who was sixth among Oiler forwards in ice-time, despite not only leading the team in scoring but also being their most productive player at even strength.

Perhaps the biggest the ace, the former World Junior legend, has up his sleeve, is that want to become the very best. Eberle has already displayed the necessary drive to not only be a very good player but an elite one. He expects a lot from himself and in turn, will not settle for anything but his very best.

Do you think it is a coincidence, that he and the other core group of youngsters are typically the first ones to hit the ice for practice and usually the last to leave it? This group wants to be considered among the very best of the best and have no qualms doing whatever is needed, to get their game to that level.

With the addition of Schultz to what was an already lethal power play, finishing third in the entire NHL, Edmonton could very likely own the league's top unit in 2012-2013. The quartet of youngsters have looked downright dominant on the man advantage in the American Hockey League and the fact the second unit will feature the likes of Ales Hemsky, Sam Gagner and Nail Yakupov...teams will definitely have to think twice before sending the Oilers to the power play.

Again, something that will undoubtedly be of great benefit to Mr.Eberle and company. While they may not be the biggest group of forwards in the NHL, if this group can take a page out of the Detroit Red Wings book and continually punish the opposition when they get on the man advantage, they will earn themselves a little more space at even strength.

At the end of the day, the Edmonton Oilers have manged to collect a pretty special group of players to re-build this once storied franchise around. Tough to say which one will turn out to be the best of the bunch but one thing appears to be abundantly clear, to those that are willing to take notice. Jordan Eberle is one helluva a player and one that seems destined to be one of league's top goal scorers for a very longtime.