One way or the other, Luongo is the reason Burke was dumped by the Maple Leafs 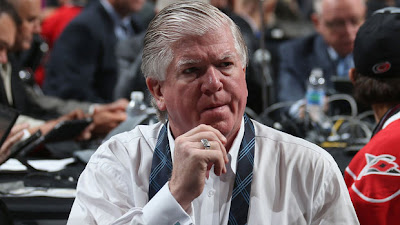 In his four seasons at the helm of the Toronto Maple Leafs franchise, Brian Burke did more than enough to see himself being dismissed as the club's General Manager. Yet one has to wonder why the organization chose to relieve him of his duties, only days before the start of an abbreviated 2013 NHL season, in favour of his right-hand man, Dave Nonis.

On one hand, there are those that are hinting Burke wanted no part of bringing in Vancouver Canucks netminder Roberto Luongo and his absurdly lengthy contract, which ultimately led to him being given his walking papers out of Leafs Nation. At the other end of the spectrum, there are some suggesting it was in fact Burke who wanted Luongo and the Leafs brass said no thanks.

While Toronto's current roster is only marginally better than the former Anaheim Ducks GM inherited back on November 29, 2008, the biggest mistake he made was trading away a solid chunk of their future, to try and win in there here and now.

What made matters worse, is the Leafs have showed no signs of real improvement under Burke's leadership. It's all fine and dandy for an organization to want to try and improve immediately but in the end, the numbers tell a different story.

Obviously the Phil Kessel trade, which would end up netting the Boston Bruins Tyler Seguin, Dougie Hamilton and Jared Knight, was Burke's big blunder. Frankly, that decision alone, has set the franchise back at least five years.

Not exactly his brightest moment as a General Manager but in his defence, he apparently had learned from the errors in his way.

Burke managed to not only steal current Maple Leafs captain Dion Phaneuf from the Calgary Flames, for what amounted to a bag of pucks but he absolutely fleeced the Anaheim Ducks out of Jake Gardiner, Joffrey Lupul and a draft pick, for defencman François Beauchemin.

Without question, both were solid moves. Making it seem less likely that he would be the one wanting to add Luongo into the mix...unless he was feeling the pressure for having not delivered a winning team. Don't get me wrong, the former fourth overall pick of the New York Islanders still has something left to give but not enough to justify having him on the books until the end of the 2021 campaign.

To make matters worse, the fact the Canucks are rumoured to be trying to have the likes of a Gardiner or Nazem Kadri included in the deal is laughable. Did the Kessel deal not teach this organization something?

Luongo would undoubtedly make the Leafs a better team in the here and now but at what cost? Does this organization really want to give up more of its future, while handcuffing themselves financially, all for the chance of being able to fight for a chance at scrimping into the playoffs?

As I have already pointed out, they are at least five years away from where they should currently be because of the Kessel move, so why make it worse? The Leafs do have some nice pieces in place to work with but not much else.

It sucks for the fans, that they were not given the type of team the were promised when Brian Burke took over but the situation is what it is.

Trying to make a "big splash" by acquiring an aging goaltender, that will be on the books for the next decade, hardly seems like the way to start moving things in the right direction..

With all due respect to the Toronto Maple Leafs organization but if they decided to show Brian Burke the door because he wanted no part of bringing Roberto Luongo to town, they should have their collective heads examined.

However, if at the end of the day, it was Burke who was indeed the one trying to desperately acquire the veteran puckstopper, the franchise should be given full marks for pulling the shoot on their former general manager.