2013-14 Preview: Yakupov should push the 30 goal mark in sophomore campaign 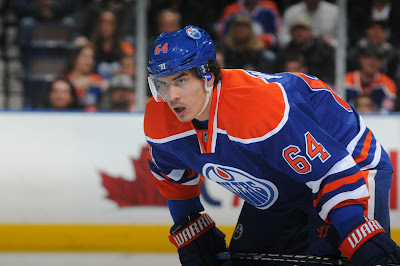 Nail Yakupov certainly had his share of ups and down during his rookie season but the Edmonton Oilers youngster appears to be the real deal. While he still has a lot to learn about being an everyday NHL player, expecting the talented Russian winger to produce a 30 goal / 50 point campaign in the coming 2013-14 season is more than reasonable.


The former first overall pick did lead Edmonton in goals during the abbreviated 2013 schedule, thanks in large part to a flurry of production over the final week of the season. With the addition of David Perron into the Oilers top six forwards and the likelihood of Yakupov being given more opportunity on a nightly basis, the sky seems to be the limit for the former Sarnia Sting standout.

After seeing what amounted to 2nd/3rd line "sheltered" minutes for much last season, one would think new head coach Dallas Eakins will hand the kid more ice time in '13-'14. While many did not like the manner in which former bench boss Ralph Krueger employed Yakupov during his rookie year, in the long run, it will probably end up doing him a world of good.

Let's be frank here. As good as #64 looked during certain games, he was simply a train wreck away from the puck. To his credit, he improved greatly as the season progressed but had Krueger not pulled in the reigns a little, the trio of Yakupov, Sam Gagner and Ales Hemsky would have killed the Oilers playoff chances early on.

Was the second line's struggles all on the kid? Far from it but allowing it to continue and not addressing the issue, would have likely set back his overall development. Instead of whining and complaining about his predicament, Yakupov worked with the coaching staff to try and improve his game. By season's end, he had already started to show signs of improvement, was seeing regular duty inside the top six and producing on the scoresheet to boot.

Heading into 2013-14, Yakupov is slated to be the club's second line right winger and could very well push Jordan Eberle for time on the team's top unit. That being said, the safe bet would be on him seeing softer competition on a line with Gagner and Perron, both of whom will have something to prove come October 1st.

After signing a three year extension to remain in Orange and Blue, #89 needs to show he can not only consistently put points on the board but also become a far better player in his own end of the rink. Same sort of deal for the former first round pick of the St. Louis Blues. After battling concussion and consistency issues under coach Ken Hitchcock in the Show Me State, Perron will be coming to Edmonton with a chip on his shoulder.

At nineteen year's of age, he already possess one of the best one-timer's in the league and looks destined to become one of the NHL's true elite snipers. Does that mean he is ready to make the jump in 2013-14? Not exactly but the fact the youngster was among the top thirty goal scorers in the league and did so seeing limited time at even strength and secondary minutes on the power play, it likely isn't that far away.

Nail Yakupov has the potential to become one of the most electrifying players in the entire National Hockey League. After watching him play game in and game out, it looks to be a matter of when he reaches that potential and not if. Make no mistake, he will have his fair share of hiccups along the way but scoring goals will not be among them.