Oilers won't lose any sleep over the departure of Toni Rajala 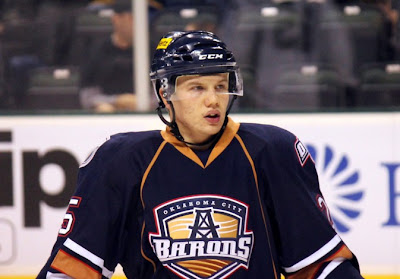 At first glance, the Edmonton Oilers decision to place forward Toni Rajala on unconditional waivers looked to be a rather perplexing one. For an organization that is supposedly starving for high end skill at the AHL level, allowing the most skilled player on the Oklahoma City Barons roster to simply walk away for nothing, seems to make little to no sense.

However, with word coming down the pipe that Rajala was planning on returning to Europe for the upcoming season instead of reporting to OKC, general manager Craig MacTavish wasted little time in reacting. After watching Teemu Hartikainen leave for a more lucrative offer in the KHL earlier this summer and the ongoing headache that has become Linus Omark, the rookie GM wasted little time in pulling the plug on another potential problem.

While the organization may be lacking when it comes to depth within their forward ranks, who's kidding who here? As far as their NHL roster goes, the Oilers aren't exactly short when it comes to high-end skill upfront. With the quartet of Jordan Eberle, Taylor Hall, Ryan Nugent-Hopkins and Nail Yakupov set to makeup the core of this team for years to come and the likes of Sam Gagner and David Perron next in the pecking order, forward depth won't be an issue for some time...especially when we are talking about another smallish type forward.

Many believe Rajala is even smaller than his listed height and weight of 5' 10" and 168 pounds, which makes him a guaranteed non-factor when it comes to finding a future spot in Edmonton. In his defence, it's hard to blame the youngster  for wanting to go to Europe and earn some money. The kid is no dummy. He sees the writing on the wall and realizes he has next to no future in the Oilers organization.

That said, MacTavish can't worry about that and having a player trying to dictate any sort of terms, especially one that they likely see no long term future with, isn't going to go over well.  In my mind, placing Rajala on waivers sends a fairly loud and clear message. As a player, you either buy into what the Edmonton Oilers are selling or you can go and find somewhere else to play. Pretty straightforward.

Oddly enough, there are those who seem almost distraught with the decision but than again, many of those also felt the trading of Tobias Rieder was some sort of blow to the organization. There is no question the twenty-two year old has an abundance of talent but is he really any different than Omark?

The diminutive Finn is four years younger than he Swedish counterpart but still looks headed for a similar fate. Could Edmonton have wasted one of their 50 contracts and kept him in the system, while he played over in Europe? Sure but at what point do they stop trying to hold back guys from moving on with their careers? As nice a talent as a guy like Omark may be, it's clear no other NHL club is willing to even give up a late round pick to add him to their organization. Does the same thing really need to happen to Rajala?

It may not be the route some fans want the Edmonton Oilers to take but at least for the moment, developing the likes of an Anton Lander or Tyler Pitlick into solid bottom six NHL forwards, takes priority over very talented but one dimensional players like Toni Rajala.
Posted by Oil Drop at 11:51:00 am