Bachman does what a goalie should do but Oilers still lose 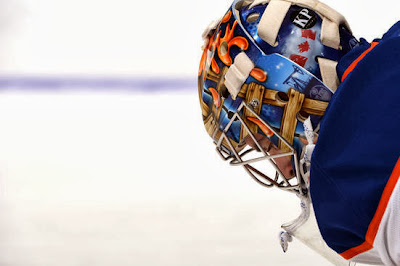 It was a night in which a battered and bruised Edmonton Oilers lineup had next to nothing left in the gas tank but still found a way to walk out of the Staples Centre with a point they had absolutely no right having. On the strength of a 47 save performance from call up Richard Bachman, the Oilers managed to head home with at least one point from their weekend road trip, after falling 2-1 to the Los Angeles Kings in a shootout.

Anze Kopitar scored the SO winner, while Mike Richards was the only skater to get one past Bachman during regulation time and added one in the shootout for good measure. Edmonton's Nail Yakupov finally ended his season long scoring drought, potting his first of the year on second period power play.

Centre Ryan Nugent-Hopkins appeared to avoid serious injury after a dirty hit from Kings forward Kyle Clifford during first period action. Clifford clearly stuck his knee out in attempting to nail the former first overall pick but somehow escaped without even a minor penalty being assessed on the play.

Despite the cheap shot from Clifford and what would eventually become Edmonton's third straight loss, the night belonged to the Oilers #3 netminder. With regular backup Jason LaBarbera coming off a less than stellar appearance on Saturday afternoon against the Phoenix Coyotes and Devan Dubnyk nursing a sore ankle, GM Craig MacTavish placed an emergency call to OKC for their #1 guy on Saturday night.

The former fourth round pick of the Dallas Stars did not disappoint, looking sharp all night long and giving his team a chance to win. While he was peppered for much of the evening, Edmonton did manage to keep most of the Kings first twenty-two shots to the perimeter during the opening forty minutes of play. Bachman kept things simple and swallowed nearly every shot fired his way, something both Dubnyk and LaBarbera have struggled with for much of the year.

That started to change in period number three. LA decided to throw everything but the kitchen sink at the twenty-six year old over the final twenty, badly outshooting the visitors 23-6.At that point, it was obvious Dallas Eakins side was running on fumes and pretty much left their netminder to fend for himself. To his credit, Bachman was more than up to the task, making a number of clutch stops over the final ten or so minutes, including a couple of more on a Kings 4-on-3 man advantage in OT.

The quartet of Boyd Gordon, Will Acton, Jeff Petry and Ladislav Smid were simply outstanding during the aforementioned penalty kill, as they somehow managed to get this one to a shootout and try to steal as second point. Unfortunately for Bachman, it was not meant to be.

Outside of Yakupov ending not only his own slump but the Oilers recent ineptness on the man advantage, there wasn't a ton of positives to take away from the night. Gordon was by far and way Edmonton's best player, logging 18 minutes of ice-time and going 68% in the faceoff dot. The former Coyotes pivot continues to impress in all areas of the game, taking on whatever role his coach asks of him.

Considering the Kings territorial dominance, the duo of Smid and Petry were good in their own end and did yeoman's work on the penalty kill for much of the sixty minutes. That said, defenceman Anton Belov was the best of the bunch on the backend, leading the Oilers with 23:30 minutes of playing time and for the first time this season, used his heavy shot and size to his advantage.

With the Edmonton losing bodies at an alarming rate and four of their next six on the road, one would have to think their 3-8-2 record could get worse before it gets any better. For the Western Conference cellar dwellers to have any hope of surviving the next couple of weeks, they are going to have to get elite level netminding.

After last night's performance, there is little doubt who should get first crack at putting this club on his shoulders and carrying them for the foreseeable future. His nameplate reads BACHMAN and wears the #30 on his back. It will likely be nothing more than a short term solution but one Dallas Eakins has no choice but to explore further.
Posted by Oil Drop at 10:01:00 am