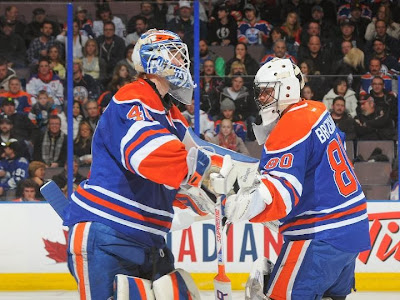 Having won their last three games, the Edmonton Oilers were looking forward to their matchup against the Chicago Blackhawks on Monday night. They were hoping to use it as a sort of measuring stick for the recently improved play. Mission accomplished. Dallas Eakins' crew is nowhere near ride for prime time. Plain and simple.


After jumping out to a four goal lead early in period two, the Blackhawks simply put it into cruise control, in defeating the Oilers 5-1 at Rexall Place. Andrew Shaw led the way on the scoresheet with a three point night but it was the trio of Duncan Keith, Brent Seabrook and Jonathan Toews that proved to be far too much for Edmonton too handle.

Ilya Bryzgalov made his Oilers debut after the Devan Dubnyk was mercifully given the hook after allowing four goals on only fourteen shots, in just under twenty-six minutes of action. That said, if it wasn't for Dubnyk making an number of big stops during the first period, this one would have got out of hand far earlier than it eventually did.

Bryzgalov looked solid in between the pipes, stopping twelve of the thirteen pucks directed his way, but to be completely honest, Chicago was merely going through the motions over the final thirty-five minutes. This was a classic case of men against boys and Edmonton was way out of their league.

The Hawks captain wasted little time in starting the onslaught, scoring five minutes in on a shorthanded breakaway, putting just a gorgeous move on Dubnyk before depositing his twelfth of the season into a yawning cage. Less than three minutes later, Patrick Kane would pounce on a loose puck and fire home his thirteenth of the year with the Hawks on the man advantage, to make it 2-0 for the defending Stanley Cup champs.

From that point on, the ice was severely tilted and Edmonton could simply do nothing about it. As previously mentioned, if not for the Oilers starting netminder, Chicago could have easily had themselves a five spot on the board prior to the first intermission. Unfortunately for Eakins, the play of his goaltender was not nearly enough to rally the troops in between periods.

The Hawks kept coming to start period two and within a matter of minutes, they had themselves a four goal cushion. Johnny Odyua was credited with Chicago's third goal of the night, as Corey Potter inadvertently punched a puck out of mid-air and into the back of his own net. Tough break for the home side but one that was well earned by the visitors.

Dubnyk's night would come to an end roughly four minutes later, as Shaw would deposit a great feed from Jeremy Morin for his first of two on the night, to make it 4-0. Just like that, the measuring stick was no longer needed. These two sides are clearly miles apart.

Justin Schultz would briefly give fans hope midway through the period, beating Cory Crawford high to the glove side with a rocket of a shot but that would be as close as the Oilers would come. With Chicago clearly in cruise control, Edmonton did manage to generate some chances over the final thirty minutes of action but were unable to sneak any more pucks behind the Hawks #1 tender.

At the end of the night, the 5-1 scoreline was flattering. Had the defending champs kept coming, this one could have rivaled the 9-2 thumping the Blackhawks put on the Oilers back in November 2011. It is rather scary to think just how little has changed over the last two years.
Posted by Oil Drop at 10:39:00 am