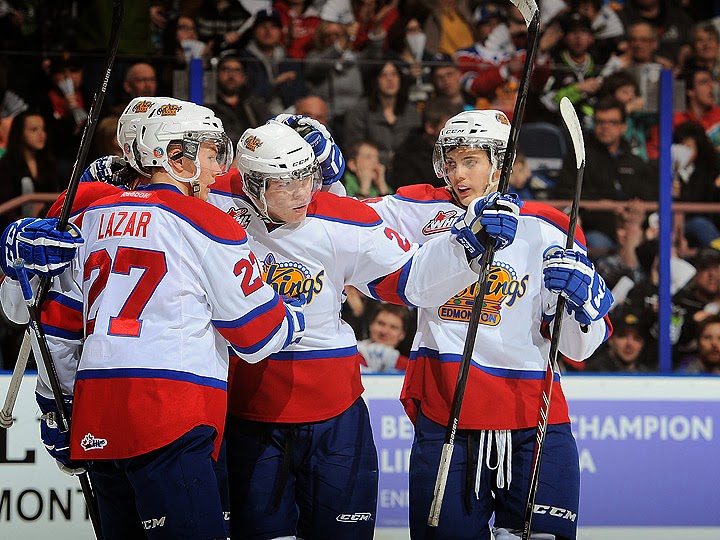 While they could very well end up meeting the Portland Winterhawks in what would surely become one of the most highly anticipated grudge matches in recent junior hockey history, the Kelowa Rockets might have a thing or two to say about it.

For the time being, all Derek Laxdal’s squad can concern themselves with are their Eastern Conference opponents and not looking forward to what has the makings of one hell of a 2014 WHL Final. Six games into their most recent post-season run and the Oil Kings have not only gone a perfect 6-0 but they have done so in the most dominant of fashions and as a collective unit to boot.

Edmonton has managed to outscore the Prince Albert Raiders and Wheat Kings by a combined total of 26-9 through six games, while holding an absolutely ridiculous 255-154 advantage on the shot clock. These kids are coming off a performance in which they fired 57 pucks on goal against Brandon starter and local product Jordan Papirny, who has now faced 102 shots during the opening 120 minutes of their second round series.

The Oil Kings have registered 40+ shots in four of those games and have done so without any one player standing out above the rest. As of this moment, Edmonton doesn’t have a single player inside the Top 15 in playoff scoring but have four players tied for the team lead with eight points, Edgars Kulda, Curtis Lazar, Dysin Mayo and Brett Pollack, with another six names all within three points.

Netminder Tristan Jarry is coming off back-to-back shutouts and currently sits atop the league with his usual miniscule goals against average, 1.50 to be exact, and trails only Medicine Hat Tigers Marek Langhamer and his eye-popping .951 save percentage with a not too shabby total of .942. Add to that a blueline which is led by captain Griffin Reinhart and Cody Corbett and a “supporting cast” of Ben Carroll, Aaron Irving, Mayo and Ashton Sautner and this group becomes more formidable by the minute.

With the departures of Martin Gernat, Keegan Lowe and David Musil, many were expecting Edmonton’s backend to be this club’s weakness in 2013-14. However in actuality, it has turned out to be the complete opposite. The moment the New York Islanders decided to send Reinhart back for another year of seasoning, was the very moment this team became a legitimate threat at defending their Eastern Conference crown for a second consecutive year.

The trio of Curtis Lazar, Mitch Moroz and Henrik Samuelsson may have carried the load for much of the season upfront but the emergence of the likes of Kulda and Pollack has allowed Laxdal to use his top players in whatever role necessary. Through six games, Lazar and Samuelsson have combined for just three goals and Moroz picked up five of his seven points in the Oil Kings series clinching win against the Raiders.

Despite not leading the charge offensively, all three have played major roles in this team’s most recent success and they are far better off for it. While this year’s edition of the Edmonton Oil Kings may not be the most talented in recent memory, they might just end up being the one that takes a serious run at bringing home this franchise’s first Memorial Cup Championship since 1966.
Posted by Oil Drop at 4:11:00 pm