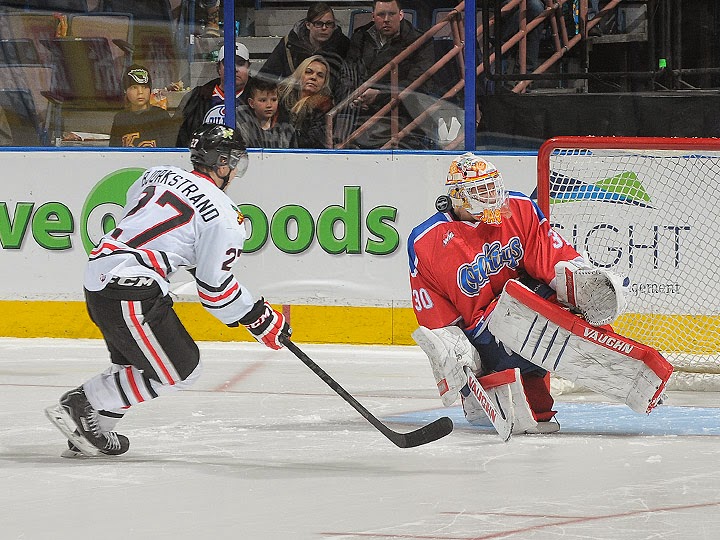 The last time the same two sides faced each other in back-to-back-to-back finals was from 1969-1971 when Edmonton battled the Flin Flon Bombers.

Just think about that for a minute and let that sink in. Ironically enough, it was that original Oil Kings squad that would ultimately move to Portland, Oregon in 1976 and the rest, as they like to say, is history.

While the organization has had to deal with their fair share of off-ice issues, the Winterhawks will be representing the Western Conference for the fourth straight year in the Championship Series and when it is all said and done, this will undoubtedly go down as the golden era in franchise history.

That said, as of this moment, all that matters to either team is the here and now and hockey fans everywhere are about to be treated to what will surely be another classic clash between these two CHL powerhouses.

It all gets underway on Saturday night at the Moda Center in Portland, as Mike Johnston’s high flying squad host Derek Laxdal and the Western Hockey League’s top defensive side. While the Winterhawks are led upfront by the dynamic duo of Nic Petan and Oliver Bjorkstrand, who are both coming off 100+ point seasons in 2013-14, it is a roster that is loaded with offensive talent and arguably the finest blueliner in the entire league.

The trio of Brendan Leipsic, Chase De Leo and Taylor Leier combined for a total of 115 goals between them and worked out to be the perfect running mates for Bjorkstrand and Petan. Add a seventy point campaign from rearguard Derrick Pouliot, who just took home WHL Defenceman of the Year honours, and suddenly you understand how Portland scored an eye-popping 338 goals to lead the Western Hockey League.

Not much has changed during the post-season, as the Winterhawks already have five players who have registered at least twenty-one points in the team’s fourteen playoff outings. After having little trouble during the first two rounds of the playoffs most were expecting the top-seeded Kelowna Rockets to give Portland all they could handle during their conference final clash but the defending champs needed just five games to dismiss the Rockets.

Over at the other end of the spectrum, the Oil Kings were not pushed in any one of their series leading up to the final and unlike last year’s showdown against Seth Jones and company, coach Laxdal’s crew comes into this one as close to being 100% healthy as any roster could be this late into a deep playoff run. As good as the Winterhawks were in 2013, Edmonton had both veteran forward Trevor Cheek and defenceman Griffin Reinhart missing from their lineup and the latter was and still remains arguably this team’s most important player.

As good as the likes of Curtis Lazar and Henrik Samulesson have been this season, to the massive contributions of Edgars Kulda, Mitch Moroz and Brent Pollock, it is the New York Islanders 2012 fourth overall pick who will be asked to play a starring role against Portland. While the Oil Kings blueline was far deeper last year, thanks in large part to the trio of Martin Gernat, Keegan Lowe and Davis Musil, it was Reinhart’s absence that allowed Ty Rattie and his mates to run wild during last year’s finale.

This year’s edition of the Oil Kings may have far fewer recognizable names in Cody Corbett, Aaron Irving and Dysin Mayo but when you add Reinhart and a healthy Blake Orban to the equation, suddenly this D core looks a whole lot tougher to deal with…especially if Tristan Jarry is on his game in between the pipes. While Kelowna may not have had any answers for Portland relentless attack, my guess is Edmonton will be raring to go and won’t be the least bit intimidated.

At the end of the day, this one could literally go either way but if their only regular season contest was any indication of the sort of hockey we can expect to see, you can bet on the entertainment value being quite high. Edmonton won 5-4 in a shootout on December 6th in which both teams took turns dominating play. Portland would score three late third period goals, in just over three and a half minutes, to force overtime in what was easily one of the most entertaining nights of hockey fans over at Rexall Place have had the pleasure of watching over the last six or so months.

The hockey was simply outstanding and fans of both sides should be expecting more of the same this time around. In a perfect world, this series will go the distance and allow us the pleasure of watching these two go head-to-head seven times over a ten day period. Having already given fans the opportunity to witness what was arguably some of the finest hockey the WHL has ever produced over their two previous meetings in the finals…you would have to be crazy to not want an encore presentation.