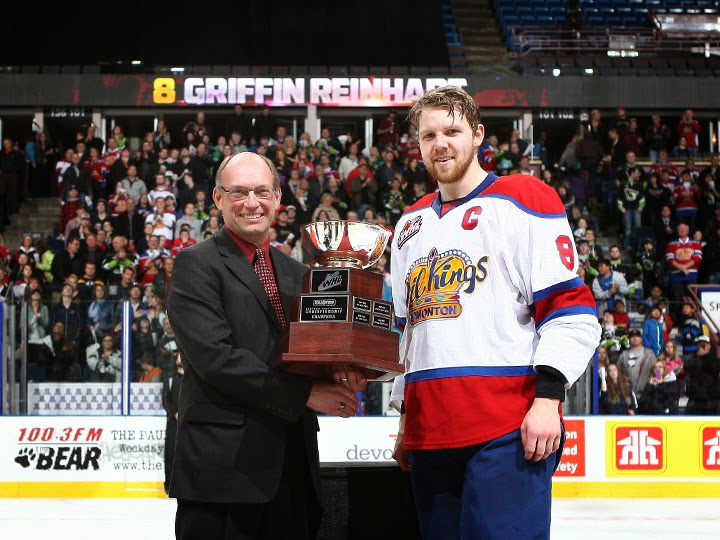 On a night in which Tigers netminder Marek Langhamer did everything he could to send this one back to Medicine Hat for Game Six, stopping 48 of the 52 pucks fired his way, but in the end the Oil Kings relentless attack was simply too much for the talented Czech puckstopper to overcome.

Edmonton has made a habit of badly outshooting and outplaying their opponent over at Rexall Place and more often than not, cruise to an easy two or three goal victory. However, there was one big difference during Game Five of this third round series and that was the play of Edmonton’s starter Tristan Jarry.

As good as Langhamer was for Medicine Hat, Jarry was equally as poor for Derek Laxdal’s side. The visitors not only scored three goals on nineteen shots but were handed a pair of freebies by the Oil Kings #30. That said, the second round pick of the Pittsburgh Penguins has been fantastic for much of the 2014-15 campaign and was the top goalie in the Eastern Conference this season.

Give the Oil Kings credit, they found a way to overcome some iffy goaltending and did what they had to do to end this series in five. Goals from Mads Eller, Edgars Kulda and the aforementioned pair from Pollock were enough to get exactly that done and more importantly, give them a full week to prepare for their grudge match with the high-flying Portland Winterhawks.

Unlike last year’s WHL Final, when Edmonton were missing both forward Trevor Cheek and defenceman Griffin Reinhart, the Oil Kings come into this one as close to being 100% healthy as a team can be at this time of year. Veteran defenceman Orban Blake returned to the lineup for last night’s Conference finale and the former Vancouver Giant could wind up being a rather important piece of the puzzle against the Winterhawks.

Pelss Remembered: In what was a rather touching tribute to former teammate Kristians Pelss, who tragically passed away last summer, forward Mitch Moroz pulled out Pelss’ #26 jersey during the team’s post-game celebrations…hoisting it high above his head to not only pay tribute to his friend but also allow those in attendance to join he and his teammates in remembering the popular Latvian. From day one, the Oil Kings motto this year has been “Play for Pelss” and it continues to be a driving force behind pushing this group forward.

Lazar named MVP: To the surprise of no one, forward Curtis Lazar was named Eastern Conference MVP for his performance against Medicine Hat. The first round pick of the Ottawa Senators finished the series with four goals and six points, while playing his usual all around solid two-way game. Lazar is coming off Player of the Week honours and seems poised to lead the Oil Kings into what should be one hell of final against Portland.
Posted by Oil Drop at 10:26:00 am