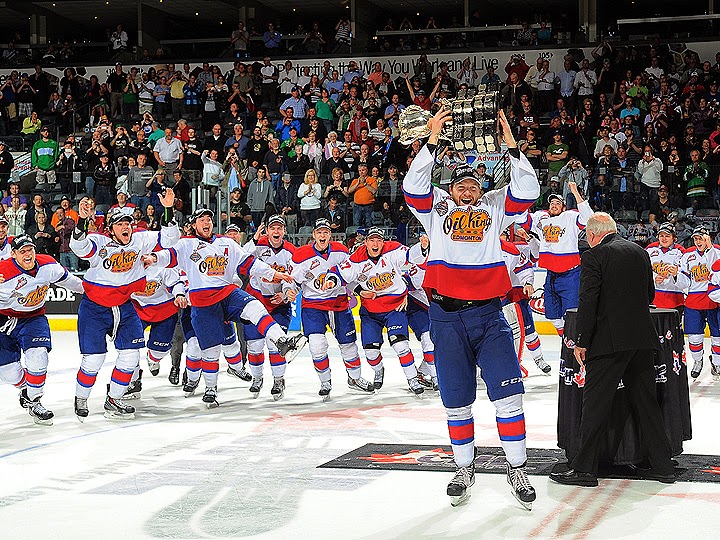 Hate to say I told you so but after watching the Edmonton Oil Kings get by the Val-d’Or Foreurs in the fashion they did to reach the 2014 MasterCard Memorial Cup Final, you just got the sense this group of kids would not be denied.

Heading into yesterday’s final against the Guelph Storm, very few if any gave Derek Laxdal’s side much of a chance of pulling off the upset and it was easy to see why.After playing double and triple overtime thrillers in their previous two games, it seemed almost unfathomable that Edmonton would have any gas left in their collective tank to knock off the high flying Storm.

Having said that, considering this team had done nothing but defy the odds since digging themselves out of what was a massive hole against the Portland Winterhawks in the Western Hockey League Final, their 6-3 thrashing of the OHL champs should have surprised no one.

While the line of Edgars Kulda, Mitch Moroz and Henrik Samuelsson took their game to another level in Sunday’s finale, scoring four of the Oil Kings six goals and combing for ten points on the afternoon, this was a complete team effort from start to finish. They certainly didn’t get off to the start they were hoping for, as Robby Fabbri opened the scoring at the one minute mark, but they weathered the early “storm” and started to take the game over.

It was eerily similar to their Game Three come from behind victory in the WHL Final against Portland, in which they fell behind by two goals early after dropping the opening two games of the series .At that point, it appeared as though Edmonton was done but they managed to turn things around in the blink of an eye and proceeded to dominate the Winterhawks over the final fifty minutes of play. That game turned the entire series around and from that point on, this group started to believe they could do almost anything and that was clearly evident yesterday afternoon in London.

The moment Cody Corbett tied things up with a power play marker midway through the first…you just knew this team wasn’t going to go down without a fight. Guelph would grab their second lead before the period was out, as Stephen Pierog put a loose puck into yawning cage thanks in large part to a sliding Pius Suter knocking Tristan Jarry out of his crease. In the eyes of many, it looked to be goaltender interference but that’s not how the on-ice officials saw it. A tough break for sure but one this group didn’t let get them down.

They might have trailing heading into the intermission but the Oil Kings were the better team in period one and would get back on level terms thanks to their seldom used fourth line. The moment Tyler Robertson snapped a shot past Justin Nichols to tie things up at 2-2, was the moment this game turned. The excitement that goal created was obvious and the Oil Kings used that emotion to their advantage. They started to come in waves and there was nothing Guelph could do to slow them down.

Kulda would give Edmonton their first lead of night with the WHL champs on the power play, snapping home his fourth of the tourney, and Mitch Moroz would extend the lead before the period was out, scoring in back-to-back games when his team needed it most. In just over twelve minutes of action, the Oil Kings turned a one goal deficit into a two goal cushion and made it look easy.

To their credit, Guelph scored early in the third to cut the lead back down to one but the Kulda- Samuelsson duo would strike again, as the Phoenix Coyotes first rounder finished off what was simply a gorgeous feed from the young Latvian and just like that, this one was all but over. Samuelsson would put the final nail in the coffin with a late empty netter to cap off what was a five point effort and a performance Oil King fans won’t soon forget.

While Kulda was rightly named tournament MVP, again, it was a complete team effort that got this team to where they are. Tristan Jarry rebounded from his inconstant play through the first four games with what was by far and away his finest performance of the week. The line of Curtis Lazar, Reid Petryk and Brett Pollock may not have hit the scoresheet in the final but they played a massive role in keeping Kerby Rychel and company in check.

Corbett led all defencemen in scoring with six points but it was the guy wearing #8 on the backend who stood out above the rest. While some well argue that Griffin Reinhart was nothing more than average during this year’s Memorial Cup, in my mind, he was the complete opposite. He may have “only” had three assists but let’s not forget this team played just over twelve periods of hockey in their last three games and Reinhart was out there for well over seven of those periods.

At the end of the day, the Edmonton Oil Kings were a team void of the high-end superstar that most winners of the Memorial Cup have but they may very well be one the finest “teams” that has won this tournament in sometime. Be it rallying around the memory of their fallen teammate Kristians Pelss or simply pushing one another to do whatever was necessary to win, these kids should be applauded for their efforts and what they have accomplished. It was one hell of ride to watch unfold and one many Edmontonians well cherish for some time.
Posted by Oil Drop at 11:27:00 am