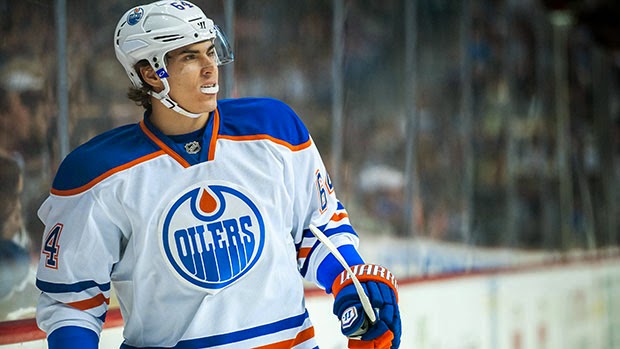 Edmonton Oilers general manager Craig MacTavish was a very busy man both leading up to the National Hockey League’s annual Free Agent Frenzy and on July 1st itself. He managed to not only ship Sam Gagner out of town but also brought in the quartet of Keith Aulie, Mark Fayne, Benoit Pouliot and Teddy Purcell for the coming 2014-15 campaign.

While all four players should help fill what were some glaring holes in the Oilers lineup last season, the additions of Pouliot and Purcell could very well affect the manner in which head coach Dallas Eakins ultimately deploys Nail Yakupov.

Now there is no question Edmonton needed to change the mix of their forward group upfront and in my mind, bringing in the players they did should help address that issue within the bottom six. Problem is…the chances of this team not using one of Pouliot or Purcell inside the top six, with the former Tampa Bay Lightning winger being the more likely of the two, appears to be highly unlikely.

As things currently stand, we would be looking at the Oilers going with one of Mark Arcobello or Leon Draisaitl as their #2 centre next season and if they were to honestly even consider using the latter in such a role, everyone within the organization needs to have their heads examined. For me, the kid should be returned to Prince Albert but if they decide to keep him around, which they probably will, it has to be in a sheltered role with a player like Pouliot to help him along.

In a perfect world, the coaching staff would love to play Draisaitl with a pair of veterans but unless you were not paying attention, Edmonton’s top two lines are not currently structured in a manner in which that will help this team improve. A top six that includes Arcobello, Jordan Eberle, Taylor Hall, Ryan Nugent-Hopkins, David Perron and Yakupov is one that could potentially be obliterated in the Western Conference, which is way they will look to use one of their new acquisitions upfront.

The fact Purcell comes with a $4.5 million price tag over the next two years, has a bigger body and is a former 65 point guy, leads me to believe he will be given first crack at earning a spot on the second line and in the process push Yakupov further down the depth chart. With the young Russian coming of what was simply a disastrous sophomore season, such a setup could very well be a disaster waiting to happen.

It is no secret the former first overall pick wasn’t very happy with how he was used in 2013-14 and with the holes in his game being what they are, not much will change come next October. While Eakins has already said he is expecting a big bounce back season from the kid, the warts in his game are not going to simply disappear overnight and because of that, his coach will not be handing him premium ice-time with quality linemates on a regular basis.

Hopefully the Oilers bench boss and the newly hired Craig Ramsey will find a way to incorporate the soon-to-be twenty-one year old and his one-timer onto the top power play unit but in my mind, there is no guarantee of even that happening. With the likes of Purcell and Nikita Nikitin now in the mix, the chances of him bumping someone down to the second unit appears to be unlikely…especially coming off a year in which he scored all of eleven goals and just four on the man advantage.

Eakins decided to take the tough love approach when it came to Yakupov during his first year behind an NHL bench but expectations for the player have to be realistic. This kid is never going to be the most defensively responsible player in the league and this coach and organization have to accept that. He is a goal scorer and needs to be used in such a manner in which he is capable of doing exactly that.

Being the liability he was last season can’t happen but at the same time, it is up to the coaching staff to work with the player and use him in the manner that makes the most sense. Now some have suggested playing him on a “soft-minutes” line with Draisaitl and Pouliot would be the way to go but in my opinion, that would be the worst possible place for him. Putting him on a line with a rookie centre who isn’t exactly a defensive stalwart, doesn’t exactly sound like a match made in heaven but it certainly does sound like one that would be destroyed on the road.

If the Oilers go into next season with the forwards the currently have, and I truly believe they will, using Yakupov on the top line with Nugent-Hopkins and Hall would be the way to go. Force the kid to improve by giving him a real opportunity and see how he reacts. In my mind, a second line of Arcobello, Eberle and Perron might be able to hold their own and it still leaves the head coach the option to flip #14 onto the top line for a handful of shifts on a nightly basis.

That would leave them a third line of Pouliot and Purcell with Draisaitl as a true “soft minutes line” that could potentially hold their own and help the youngster find his way. Is it a perfect setup? Far from it but these are the players that are currently here and it is up to the organization to ensure they don’t further damage the relationship between themselves and Nail Yakupov. No matter how you look it, this isn’t going to be a playoff team. Ruining a potential long-term relationship in search of something that is nothing more than a pipe-dream, makes zero sense.

Now do I believe they will go the smart route and work with the player? Unfortunately I do not and because of it fans of the Edmonton Oilers will likely have the pleasure of watching Yak skate around with the #10 on his back for just one season in Orange and Blue. Hopefully I am just misreading the tea leaves here but I honestly don’t believe that I am.
Posted by Oil Drop at 12:05:00 pm