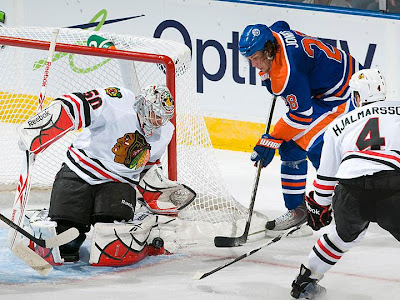 Well they've decided to drop both Petrell and Hordichuk from the starting lineup and add in Eager and Lander. Eager will get another chance at his former team and Lander is being rewarded for being the best Oiler on the ice against the Sens. Plys he will give them the security of having another centre of Gagner's back acts up.

**UPDATE**
The lines were changed up at Friday's practice and we shall what they go with come Saturday night. It looks like barring a setback, Sam Gagner will return to the lineup against the Blackhawks but it's the fourth line where the Oilers may get an injection of energy. Darcy Hordichuk was taking first team reps at practice so he looks like he'll be making his return to the Oilers. Hordichuk won't see a ton of minutes but he will do his thing and get the crowd into the game. Ben Eager looks like he'll come out again and Anton Lander will be a scratch, despite being the teams best player against the Senators.
Defence Pairings


Edmonton currently has two legit NHL defencemen on their roster and until that changes, it's not really fair to expect much out of this current group. With both Teubert and Chorney being re-called from Oklahoma City, the Oilers should at least have six healthy defencemen. The Peckham-Petry tandem was terrible against Ottawa and if they don't turn things around against Chicago, Teubert and Chorney could see some major minutes. Edmonton's special teams will definitely feel the effects of having only two NHL caliber D men and it may force the coaching staff to keep Tom Gilbert off the power play. Gilbert will play a ton 5-on-5 and on the penalty kill. Chorney and Petry will each man  the point on the Oilers power play units with four forwards on each group.

While Dubnyk was no better then Khabibulin against the Sens, by going back to the veteran netminder, the coaching staff my be sending the wrong message to Devan. There is no good reason for them to start Khabby tonight...unless they have lost confidence in Dubnyk's game and the obviously have. I am all for playing one guy over the other, if he's clearly been better, but of late, that has not been the case. Get back to the rotation until one of them is red-hot.

Nothing confirmed on who the Oilers will start in goal but I would think that Devan Dubnyk will get the call. Nikolai Khabibulin has had three tough outings in a row so giving Dubnyk a shot at more time in the crease makes perfect sense. With the club heading back out on the road with back to back games in Dallas and Nashville, both guys will see time in goal. This team badly needs their goalies to step up.