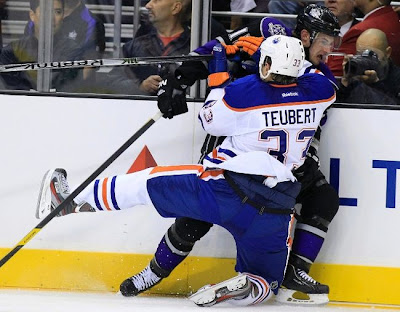 The Oilers made it official on Friday afternoon, as they recalled defencemen Colten Teubert and Taylor Chorney to help with their suddenly shrinking ranks on the backend. With four regulars out with a variety of aliments, Edmonton's starting defence will look like this against the Chicago Blackhawks on Saturday night:
Could be a long night at Rexall Place and an even longer four game road trip, if they don't look at bringing in the cavalry. Steve Tambellini is in a tough spot but just ignoring what needs to be done, doesn't make any sense. The time has come to move one of their many forwards, prospects or draft picks to try and right this suddenly sinking ship.

The coaching staff finally gave in and made changes to the forward lines during Fridays practice. While one of the lines was something I have been hoping to see all season long, there is another that I am not too fond of.

These are an improvement from what they had been going with of late but I really do not like the look of the Horcoff line. Taylor Hall has been struggling for some time now and because of those struggles, he has attempted to do far too much on his own. My guess, is the coaches are hoping that playing alongside Horcoff and Jones will allow the youngster to "simplify his game" but I fear it will have the opposite effect. Playing with two far less talented players, I fully expect Hall to try and take even more on his plate playing with these two. I would much rather see him play with Hemsky and one of Gagner or Horcoff. It will allow him to still play with skilled players, while slowing things down and letting the game come to him.
Sam Gagner Injury Update

Tom Renney Post Practice Comments
Omark Hurt In Oklahoma City
The talented winger took his demotion to OKC like a good soldier and from all reports, had played very well in his first six games back in Oklahoma City. Then came game number seven. Omark picked up another assist, his seventh point since he was sent down but short time later, things took a turn for the worse.
On that rather innocent looking play, Linus somehow managed to suffer a broken ankle and will be sidelined indefinitely. ﻿With the Oilers struggling to score goals and the young Swede putting up points in the AHL, the injury couldn't have come at a worse time for both club and player. According to his agent, Patrik Aronsson, Omark will not require surgery but he is expected to be out of action for at least the next six weeks. Unfortunately, Omark won't be finding himself back to the NHL anytime soon, be it with Edmonton or another organization.
Posted by Oil Drop at 12:10:00 am