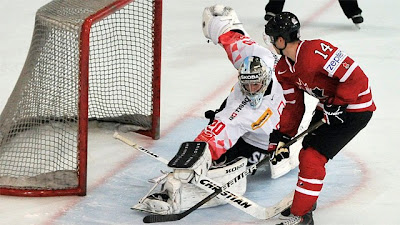 With the Stanley Cup playoffs just starting up their second round of series, this tournament continues to be an after thought for many fans and players alike. While their roster is still littered with talented players, it is missing much of its "core" veteran presence. Having said that, this team is very young but also highly skilled. With a young nucleus upfront that includes Eberle along with his Oilers teammate Ryan Nugent-Hopkins, New York Islanders John Tavares, Carolina Hurricanes Jeff Skinner and Winnipeg Jets forward Evander Kane, they look to be in good shape. Add to that the veterans like Anaheim Duck teammates Ryan Getzlaf and Corey Perry, along with Chicago Blackhawks Patrick Sharp and it is clear Canada is far from being "short" on talent.

In fact, do not be surprised to see a player like Jordan Eberle have a bit of a coming out party in this year's championship. While he has just completed his second season in the NHL, this will be the Regina native's third trip to the post season tournament. With his proven track record as a big time producer for Team Canada, Eberle was invited to play at the Worlds before playing his first National Hockey League game. Hockey Canada and fans of the World Junior Championship know exactly what this kid is capable of under pressure and after two seasons of watching him play on a nightly basis, fans of the Edmonton Oilers are more then aware of the abilities that Mr.Eberle possess. Coming off an impressive 34 goal, 76 point campaign, I feel the time has come for the rest of the hockey world to take notice of how good Jordan Eberle is and take notice they shall.