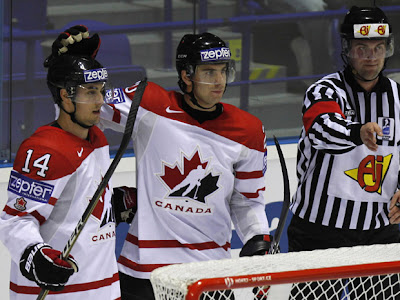 With the club naming Ryan Getzlaf as team captain on Thursday, much will be expected from the former Olympian and his Anaheim Duck teammate Corey Perry. The duo are set to play alongside Dallas Stars standout Jamie Benn, on a line that could potentially give clubs fits all tournament long. Add to that the trio of Patrick Sharp, John  Tavares and Jeff Skinner that were solid in their final tuneup against Switzerland and a line featuring both of the Edmonton Oilers youngsters playing with the Vancouver Canucks Alex Burrows and suddenly Canada's quality upfront appears to be almost laughable. When your so called "fourth line" will feature Andrew Ladd playing down the middle with two of O'Reilly, Purcell and fellow Winnipeg Jet Evander Kane, it is easy to see why Canada will be a handful for all to deal with. This club has been built around many of the best young players in the game today and in a perfect world, a little more veteran presence would have been nice but it is what it is. That being said, look for some of these kids to leave their mark on this tournament, making Hockey Canada's decision for the 2014 Winter Olympics that much harder.

From an Oilers standpoint, the fact that Eberle and Nugent-Hopkins will start off playing on a line with one of their fans most despised opponents, will make for a very interesting dynamic. While Burrows is unquestionably a talented player, many are not fond of the stunts that the former thirty-five goal man can sometimes pull out on the ice. Having said that, when he decides to concentrate on playing hockey and not making a mockery of the game, he is very effective. Burrows has proven he can produce when playing with elite level talent, aka: the Sedins, and hence the move to play him on a line with the Edmonton's dynamic duo.

As is the case in almost any every international competition, Team Canada will have all sorts of options when it comes to putting together potential five man power play units. That being said, I would frankly be stunned if head coach Brian Sutter did not go with Nugent-Hopkins as his guy come crunch time. In just one short season, the Nuge has already proven to be one of the NHL's premier players with the man advantage and using him in this sort of setting, on the bigger ice surface seems like a no brainer. The kid is lethal when he is given time and space...two things that he will see plenty of when Canada is on the power play.

When it comes to Jordan Eberle, it seems as though he can do no wrong when he pulls on a Team Canada jersey. He has done nothing but score big goals for his country throughout his junior days and looks poised to break out on the World stage one more time. Some will look at Canada's roster and think Eberle is nothing more then another talented youngster in their stable and while that may be true, they would be selling the second year Oiler short. The kid has a knack for coming up large in pressure situations and if you had to pick one player off this team as the potential game changer, you would be wise to go with Mr. Eberle.

While the loss of Montreal Canadiens defenceman P.K. Subban to a knee injury in the team's opening exhibition game against Switzerland is a major blow, Canada still has the makings of a quality blueline...albeit one that lacks much of a veteran presence. They will undoubtedly be led on the backend by the likes of Keith, Bouwmeester and Phaneuf but it will be the play of the other three defenceman that will ultimately determine how successful this club is. If a couple of the so called "youngsters" can step up their level of play then their D will be just fine. As a group they will not have much of an issue transitioning the puck on the larger ice surface but they could be in for a bit of a rude awakening in their own zone.

They do have the makings of a nice mix of offensively gifted players with size but it is that lack of a "winner mentality" that could become an issue at critical junctures. Outside of Duncan Keith, no one on this blueline has done much in the way of winning at the NHL playoff level and to have to count on players like a Jay Bouwmeester or Dion Phaneuf  as your "go to guys" may be asking a little much. While they have the physical ability of being those types of difference makers, they have yet to show they are capable of delivering the goods at crunch time. It is all well and good if a player gets the job done during game number forty-nine of the regular season but it means nothing in the end, if you can't deliver the same type of performance in a winner take all scenario.

Heading into game one, Cam Ward is the unquestionable starter with Devan Dubnyk slotted in as his backup. The Carolina Hurricanes netminder is not only a former Conn Smythe and Stanley Cup winning goalie but has also won a gold and silver medal as part of Team Canada in the 2007 and 2008 World Championships. Add to that, the fact that he was Brent Sutter's horse for the Red Deer Rebels and the starting job is his to lose.

Dubnyk had a fantastic final three months to his 2011-2012 campaign and his overall statistics were identical to the numbers Ward put up in Carolina. The Oilers puck stopper did play in one of the two exhibition games against Switzerland, giving up only one goal and winning player of the game honours in their 2-1 shootout victory. While Dubnyk still has to prove that he can be a legitimate starting goaltender in the NHL, in a short tournament like the World Championships, the head coach has to go with the hot hand. If he ends up being that guy, then he might just find himself as the starter in the medal round.
Posted by Oil Drop at 5:03:00 am