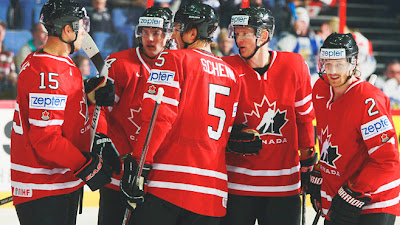 After a somewhat sluggish start to the opening period, Canada would get on the board first courtesy of a brilliant play from captain Ryan Getzlaf, just prior to the fifteen minute mark. The big centre lugged the puck across Slovakia's blueline and found Benn with a lovely feed, that the Dallas Stars standout neatly slipped past Hamerlik, giving the favourites a one goal lead after twenty minutes.

To the Slovaks credit, they came back to tie things up early in the middle frame thanks to a sizzling finish from Red Wings prospect Tomas Tatar. Juraj Mikus picked up a loose puck just outside the Team Canada blueline and carried it deep inside the zone before finding a wide open Tatar in the slot. The talented winger snapped a laser underneath the crossbar and past a stunned Cam Ward, to even things up at one a piece.

Just over five minutes later, Canada would lose Burrows for the remainder of the night and possibly much longer. After colliding with two Slovakian players and falling hard to the ice, there was no immediate indication given on the severity of the injury to the Canucks winger but watching him stumble back to his feet, leaves one to believe that he may not be seeing game action anytime soon.

With Burrows no longer at his disposal, coach Brent Sutter had to move one of his forwards up to play with the Edmonton Oilers duo of Jordan Eberle and Ryan Nugent-Hopkins and he settled on Winnipeg's Evander Kane. That move would pay immediate dividends, as Kane would pickup the lone helper on Eberle's go ahead marker, that Hamerlik would love to have back. The Oilers leading scorer took a sharp angled shot, that somehow found its way through the netminder and barely over the goal line, to restore Canada's one goal lead.

Less then three minutes later, Ladd would make it a two goal cushion thanks to a hard forecheck from Ryan O'Reilly. The talented Avalanche forward forced a turnover just inside the Slovak blueline and two quick passes later, the puck was in the back of the net. Heading into period three, Canada looked to have this one well in hand but Milan Bartovic would score early in the final frame, on a shot that Ward should have had.

While there were not many tense moments after having their lead cut back down to one, the final score left some surprised. Not exactly sure why that would be, as Slovakia did have the likes of Zdeno Chara in their lineup and received a stellar goaltending performance Peter Hamerlik to keep them in it.

With defenceman Marc Methot sidelined with a groin injury and P.K. Subban already out for the tournament  thanks to a knee injury, Canada turned to Murray to fill the final spot on the blueline. The youngster did not look to be the least bit out of place and actually looked right at home playing with Duncan Keith. While there was no word given on how severe Methot's injury is, one would think that he would be unlikely to suit up against the Americans on Saturday. Thus giving Murray, at least one more shot at trying to win a job as a regular on the back end. It also gives him another chance to show the Edmonton Oilers President of Hockey Operations, Kevin Lowe, just what he brings to the table and possibly convince the six time Stanley Cup winner to have his club select the rearguard with the top pick in this year's upcoming entry draft.