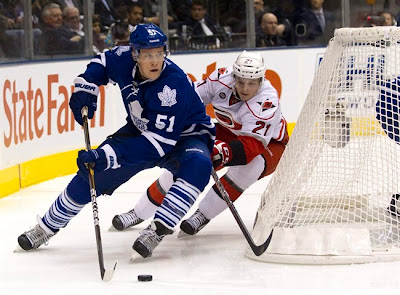 With the 2012 NHL Entry Draft only ten days away, the buzz around what the Edmonton Oilers will do with the first overall selection is starting to pick up steam. Will they keep it and call the name of Nail Yakupov, giving them a fearsome foursome upfront or do they look to trade the pick and move down? Those are their options. Can't see them taking anyone but Yakpov with the first selection, meaning the potential of the Oilers making a move does exist. Not surprisingly, Toronto Maple Leafs General Manager Brian Burke seems to be making the most noise about acquiring that top pick.

Rumours about the Leafs trying to move up on Draft Day have been circulating for months. The most commonly heard one includes the Maple Leafs fifth overall pick and defenceman Luke Schenn. Nothing against Schenn, who is a very good young blueliner, but that will not be enough to pry the number one pick from Steve Tambellini and the Oilers.

Earlier this week Sportsnet's Jeff Marek was on Oilers NOW with Bob Stauffer, and hinted that Toronto may not only be looking to acquire the top pick but Burke would like to get his hands on both Yakupov and Alex Galchenyuk. He did go on to say the Leafs would likely have to include their first rounder and defenceman Jake Gardiner or a combination of Schenn and Gardiner. While Leafs fans may not be thrilled with the idea of  moving Gardiner, they may have little choice if they want a shot of calling out Yakupov's name on June 22nd.

From an Oilers perspective, adding a defenceman like the former first round pick of the Anaheim Ducks and the fifth overall pick is something they would have to seriously consider. The twenty-one year old rear guard looked very good in Toronto during the 2011-2012 campaign and would be a perfect in Edmonton, both from a skill and age stand point.

Also, there is a belief out there that Gardiner could possibly help a club land the services of soon to be free agent Justin Schultz. The Maple Leafs blueliner and Schultz were teammates for two seasons at the University of Wisconsin and are apparently good friends. Definitely another positive for Edmonton but this might make moving Gardiner even harder for the Leafs. While Edmonton will be one of many teams that will be going all out to acquire Schultz, it is believed that Burke will be doing the exact same for Toronto.

Pulling off such a deal would be a huge risk for both sides but something that could work. Unless the Oilers are floored by an offer, there is no way they can give up the top pick. The possibility of adding a player like Yakupov to their current group, could produce something very special. That being said, adding a player of Gardiner's ability plus a top five pick, should make Steve Tambellini consider the idea of moving the first overall selection.