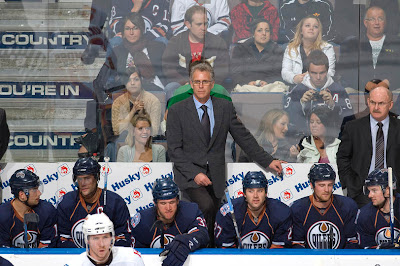 In announcing that the Edmonton Oilers had decided to bring former head coach Craig MacTavish back into the organization, General Manager Steve Tambellini and company have made their decision on who that final piece to their front office team would be. It was no secret they were looking to add another hockey mind to the Tambellini/Kevin Lowe combo in the front office and bringing in MacTavish to be the club's vice-president of hockey operations was a sound move. Some look at this is nothing more than another one of  the "old boys" being brought back but I would beg to differ.

The "old boys club" scenario has been an ongoing concern with many a fan in Oilerland for what has seemed like decades. Generally, organizations will bring in people that their front office team are comfortable with and  trust what they can bring to the table from a hockey stand point. With that being the case, it should come as no shock that Edmonton brought MacT back into the mix. There are differing opinions out there on how good a coach he was but from a standpoint of being a smart hockey guy, there is no debate.

Having the former Oilers bench boss giving his input on what this franchise can do to help turn their fortunes around surely can't be a bad thing. After having been a part off the club as an assistant or head coach from 1999-2009, MacTavish has been away from the day to day operations of the the club for the past three seasons. He did help them with some scouting during the 2009-2010 season but having him away from the organization's day to day operations the past three years should be a blessing in disguise.

He can now approach this from insider and outsiders point of view and give the rest of the management team some helpful feedback. Ultimately you want a person in that position who isn't afraid to speak his mind and give his opinion, regardless of the outcome. Which is something he will have little trouble doing. With MacTavish it has always been and always will be about winning.

Craig is one of those guys who will always bleed "Orange and Blue". No matter where he goes or what he does, in hockey circles he is always looked upon as an Edmonton Oiler and he admitted as much during his press conference on Monday afternoon.

“In most of the job interviews I’ve had over the last three years, one of the questions has always been, ‘How do you see yourself fitting into this organization. I see you as an Oiler.’ I didn’t say it at that time, when I was trying to land the job, but I very much felt that way,” said MacTavish.

It is something he has never shied away from and one of the reasons he is a perfect fit for the job. While some in this market have rightly questioned some of the decisions that  Tambellini and Lowe have made in the past, make no mistake, they have only one goal in mind and that is to make the Edmonton Oilers a perennial Stanley Cup contender. Bringing Craig MacTavish home can only help with that transition...once an Oiler, always an Oiler..