Oilers fans should expect more of the same from Eberle 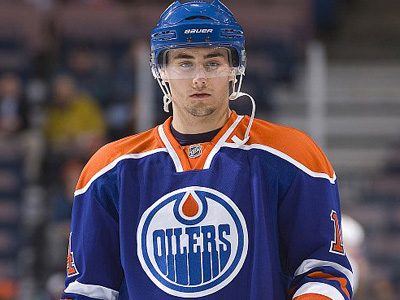 When one looks at the first two years of Jordan Eberle's career, there really isn't much not to like. The talented winger has made an almost seamless transition to the NHL game, after a brilliant junior career. He not only starred for Team Canada at the World Juniors but also won the CHL player of the year in 2010. The former Regina Pats standout was and still remains, an absolute stud and his early success in an Edmonton Oilers jersey should surprise no one.

After lighting up the league for thirty-four goals and seventy-six points in his sophomore season, what will the native of Regina do for an encore? While some feel his totals this season were a bit of an anomaly, partly because of his rather high shooting percentage of 18.9%. They look at his seventy-six points and think he might be pretty darn close to what may be his peak from a points stand point. There might be something to that but in my mind, it's the complete opposite. This kid looks like he is just getting warmed up and seems poised to take a yearly run at the forty goal barrier and beyond.

With the likes of Ryan Nugent-Hopkins and Taylor Hall a year wiser, the trio should only get better. Add the possible additions of a Nail Yakupov and a legitimate power play quarterback into the mix, a better season out of Ales Hemsky, which shouldn't be that difficult to achieve, and how can Eberle's number not improve?

As good as his season was, Jordan did it playing less than any of the Oilers regular top six forwards.While that can definitely be a positive when it comes to match up side of the ledger, Eberle seems to play better when he sees the ice more often. The combination of more ice time and better players to play with, should mean more points for Edmonton's leading scorer.

Eberle is currently the Oilers triggerman on the power play and will likely remain as such for the next number of years. While it was Hall who actually led this team in power play goals, it was the attention that teams pay to Edmonton's top goal scorer and Nugent-Hopkins, that it almost leaves Taylor as an afterthought on the man advantage. All three youngsters managed to collect at least twenty points a piece on the power play, despite both Hall and RNH missing significant time. Hard to imagine them not being better come 2012-2013.

Which brings us to the shooting percentage debate. Only three players who scored  twenty goals last season had a better number than Jordan during 2011-2012. Calgary's Curtis Glencross(26 G - 23.6%), Lightning superstar Steven Stamkos(60G - 19.8%) and the Red Wings Jiri Hudler(25G - 19.7%). While Glencross and Hudler are both solid players, the comparison to Stamkos is an interesting one.

The NHL's leading goal scorer is without question the league's best sniper but it is a title that Eberle could challenge for in the not to distant future. In my mind, the Oilers youngster likely won't push the sixty goal mark that Stamkos was able to attain but he should be in that forty to fifty goal range.

While the former first overall selection has pushed the three hundred shot mark in each of the last three seasons, he has still maintained a shooting percentage of 17.0% for his four year career. Conversely,  Eberle has put up a fifty-two goals on three hundred and thirty-eight shots over his two seasons. Which is good enough for a 15.4% shooting percentage.

Eberle doesn't shot the puck nearly as much but he does not possess the canon of a shot that Stamkos does. That being said, he owns one of the finest sets of hands in the game with a ridiculous release. In the grand scheme of things, his shooting percentage means little. All that matters is if he continues to put points on the board, which should not be a problem.
Posted by Oil Drop at 12:01:00 pm