Could this finally be it? 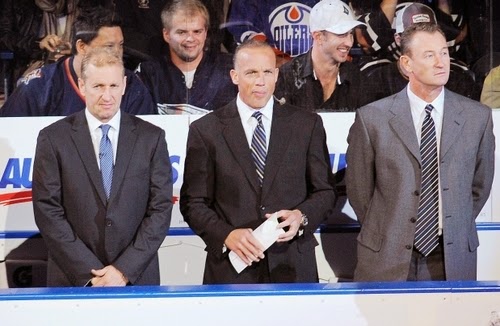 Prior to the start of the 2008-09 season, the Edmonton Oilers organization decided to add former captain Kelly Buchberger to their NHL staff as an assistant coach. After working at his craft for the previous four seasons as an assistant with the now defunct Edmonton Road Runners, an organizational developmental coach and the head coach of the Springfield Falcons in 2007-08, the time had come for the fan favourite to get his chance in “The Show”.

While there were those who questioned the move from the outset, Buchberger earned his opportunity to be placed behind a National Hockey League bench. That said, Edmonton are mere weeks away from missing the playoffs for an eighth consecutive season and the last six have come with the native of Langenburg, Saskatchewan as the lone constant on the coaching staff.

With that being the case, one can’t help but wonder if the forty-seven year old is on his last legs as a member of the Oilers staff. There are some who believe Dallas Eakins may have had his arm twisted into keeping Buchberger and Steve Smith as part of his staff but in all honesty, no one has any proof of that actually being the case.

If we are to take Eakins at his word, the main reason he kept both around was because of their familiarity with not only the players but also the environment surrounding the entire situation. With the former Toronto Marlies bench boss about to complete his first season on the job and Keith Acton being his #2, the urge to keep either around likely won’t be nearly as strong.

Smith has been in place since 2010-11 but did not have to earn his coaching stripes in the minor leagues like his former teammate. He was given a spot behind the Calgary Flames bench during the 1997-98 after retiring from the NHL but that lasted just one year, as the three-time Stanley Cup winner decided to come out of retirement to play another three seasons before calling it a career.

While some were stunned by Eakins’ announcement that the duo would be returning for the 2013-14 campaign, much of the public outcry came from the fact Buchberger was retained. Considering the organization had parted ways with four different head coaches during his tenure, one couldn’t help but wonder how he still had his job.

Current general manager Craig MacTavish left town following the ‘08-‘09 season after an eight year run as the Oilers head coach, while Pat Quinn lasted all of one season before handing over the reins to Tom Renney and eventually Ralph Krueger. When a club brings in a new head coach, they are generally given the ok to bring in whomever they want to round out their staff.


If Dallas Eakins wasn’t given that opportunity heading into his rookie season, management should have their head examined for doing going down that road. If he did get the chance to bring in his guys and decided to keep both Buchberger and Smith on his staff, no one can really complain about them still being here.

However, with this season having gone the way it has you can bet on the coaching staff being tweaked during the off season. The chances of Keith Acton being let go seem to be highly unlikely, meaning the axe will fall on either one or both of the two mainstays. My money would be on the latter but when it comes to Kelly Buchberger and the Edmonton Oilers, who really knows.
Posted by Oil Drop at 10:55:00 am