Time to show RNH some love 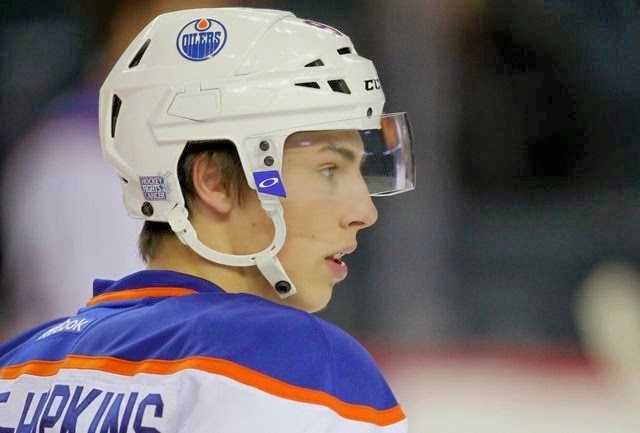 Heading into the Olympic break, the Edmonton Oilers trio of Taylor Hall, Ryan Nugent-Hopkins and Nail Yakupov looked to have formed a bit of chemistry. Unfortunately, the young Russian took a shot off his ankle in their first game back against the Minnesota Wild which forced him to sit out Edmonton’s next game against the Calgary Flames.


Since returning to the lineup against the Ottawa Senators, Yakupov was given a brief look alongside #4 and #93 against the Sens and New York Islanders but it didn’t last long. Dallas Eakins decided to reshuffle his lines and the Oilers have gone 2-2-1 since shifting Hall onto a line with Sam Gagner and David Perron and placing Jordan Eberle with RNH and Yakupov.
Problem is, the Nugent-Hopkins line has been downright awful in almost every one of those games. While the club may be coming off what was a fairly successful four game road trip, the only players currently generating any sort of offence are Hall and Perron. Yet we continue to see the same combinations coming over the boards time and time again.

Perhaps the head coach likes what he is seeing or is just fixated on the fact Edmonton has gone 9-4-3 in their last sixteen. The fact of the matter is they have gone 4-3-2 since the break and have been earning points with smoke and mirrors. Both Viktor Fasth and Ben Scrivens have played well and the group as a whole have started to play a little more discipline in their own end of the rink but they are creating absolutely nothing on the offensive side of the ledger.

Outside of having pucks bounce in off opposition players, like Matt Hendricks’s goal against the Hurricanes during yesterday’s win in Carolina , Edmonton’s second, third and fourth lines are pretty much non-factors when it comes to scoring goals. With the way Eakins currently has his lines structured it is sort of tough to take issue with anything we are seeing out of the bottom two lines.

By continuing to throw out the same top two lines, the Oilers rookie coach is accomplishing nothing but making his counterparts life far too easy. If Hall and Perron are the only two currently pushing the pace, why on earth are they on the same line? Especially when consider Eberle and Perron have shown flashes of chemistry when placed on the same line and Hall is coming off his recent success with the Nuge and Yakupov.

Now I am not suggesting they reunite the Hall-Nugent-Hopkins-Hall line, as the Perron-Gagner-Yakuov line is a disaster waiting to happen.  That said, either swap back to what was working prior to the Olympics or put Gagner in between Eberle and Hall with RNH centring Perron and Yakupov. Cahnge it up already….this isn’t working.

Does the fact that Eberle and Nugent-Hopkins are arguably playing the worst hockey of their career not concern anyone? It scares the hell out of me and it had better be addressed and quickly. For me, priority one over the final four weeks of the season should be fixing what is currently wrong with RNH…not earning meaningless points in the standings.

It’s all well and good that the Edmonton Oilers are winning hockey games when it means absolutely nothing but just like the previous three seasons, the focus down the stretch needs to be on developing these guys further. Anything short of that is completely unacceptable.
Posted by Oil Drop at 10:15:00 am