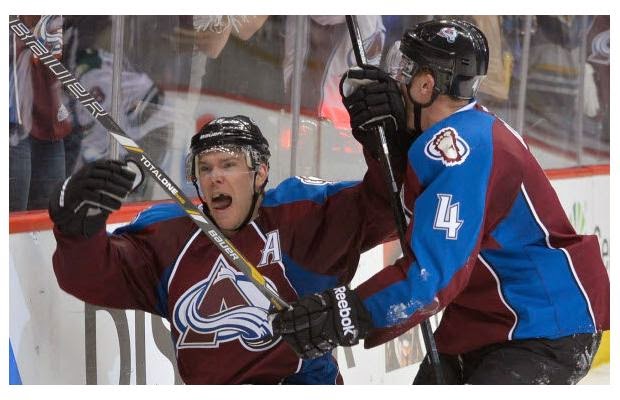 There is no question that the 2013-14 campaign will go down as one of the most disappointing in the history of the Edmonton Oilers. This was supposed to be the year the guys in Orange and Blue were going to push for a playoff spot and instead they did nothing more than push for yet another lottery pick.

It was truly a season to forget but one general manager Craig MacTavish must move away from rather quickly. The organization needs to thoroughly analyze what went wrong but they simply cannot dwell on what went wrong.

The season is done and nothing MacT does over the next five or so months will change that. While the second year GM will most certainly be looking to improve his club via unrestricted free agency and trade, the latter will likely be the only real option at his disposal to improve the Oilers blueline.
With that being the case, I decided to take a look at what Edmonton’s thirteen forwards could look like if they were to go out and fill out their roster with nothing but UFA signings this summer.

There are those who would like to see Eberle shipped out of town but the chances of that happening are slim and none. The three kids have shown to be more than capable of producing points at the NHL level and the time has come to leave them together and see what they can do. Breaking them up from time to time is fine but the days of separating these three for weeks on end has to stop. Instead of trying to “spread the wealth” MacTavish has to go out and find another legitimate top six NHL forward

While the Oilers had to give up a player who I still believe will have a very good NHL career in Magnus Paajarvi to bring Perron on board prior to last season, it was the sort of deal this organization had to make. While moving Paajarvi when they did was the right thing to do, taking a serious run at signing Avalanche centre Paul Stastny to a long-term deal during this summer’s free agent frenzy would also be a wise move for MacT to make.

Many have been drooling over Stastny’s performance during Colorado’s opening round series against the Minnesota Wild but the son of Hall of Famer Peter Stastny has been on my ”Oilers Wish List” for the last two years. Now eight years into his NHL career, the former second round pick has finally morphed into a solid two-way guy who can put up points and not need a compass in his own end of the rink.

Adding the six-time twenty goal man to Edmonton’s top six forwards could be exactly what the doctor ordered for this group and more importantly, it should allow a player like Nail Yakupov to bounce back from what was simply a disastrous sophomore campaign. Considering Stastny is in the final year of deal which saw him earn $33 million over the last five NHL seasons, it might take a good chunk of change to get him signed but it would be money well spent.

In a perfect world, having Boyd Gordon centre Edmonton’s fourth line would be great but in reality, it is not an option in the here in now. This group’s roster has far too many holes that need filling, some being of the very large and expensive variety, in order to carry a guy making $3 million year on the fourth line. In the short-term and with better players playing with him, in my mind, Gordon is more than capable of holding his own on the Oilers third line. The question then becomes, who are those other players?

With the organization signing Mark Arcobello to a one year deal and Anton Lander likely to be re-upped this summer, pencilling one of the two on Dallas Eakins’ third line in 2014-15 would seem to make perfect sense. Both are defensively responsible and have the ability to produce points, though Lander has yet to do the latter at this level, and more importantly…both well come relatively cheap.

With two of the three spots already spoken for it will be up to MacT to round out that trio in the summer. There are two names that standout above the rest…Toronto’s Nikolai Kulemin and Anaheim Ducks forward Daniel Winnick. Both are bigger bodies who are defensively responsible, can chip in offensively and are capable of filling in as short-term solutions inside the top six.

However neither has consistently produced during their time in the NHL and both have struggled to use their size to their advantage on a nightly basis. Kulemin would be a nice fit as a guy who could flip-flop with Yakupov if the youngster has his struggles, while Winnick would likely form a perfect duo with Gordon on the third line. Neither one would be sure things but both would be worth taking a run at.

When it comes to the fourth line, there are those who hope the Oilers continue to roll with the likes of Matt Hendricks and Luke Gazdic and then there are those who have no use for Gazdic but have slowly started to come around on Hendricks, after doing nothing but complaining about both the player and his salary when he was acquired for Devan Dubnyk.

Regardless of what anyone would like to see, both the GM and head coach have made it abundantly clear they would like to add more tenacity and size to the roster. With that said, Gazdic may not play every night but you can bet he’ll be back in ’14-‘15. Some may think he serves no purpose but go ask the players in that dressing room if they want him around and you will get a completely different viewpoint.

With tenacity and size being on the shopping list, don’t be surprised to see MacTavish take a serious run at New York Rangers forward Brian Boyle. The twenty-nine year old American won’t put up much in the way of points but he can play all three positions upfront, is decent in the face-off dot, solid on the penalty kill and at 6’ 7” and 245 pounds, he would more than qualify for what the Oilers would be looking for.
Posted by Oil Drop at 2:03:00 pm