Jordan Eberle needs to be better 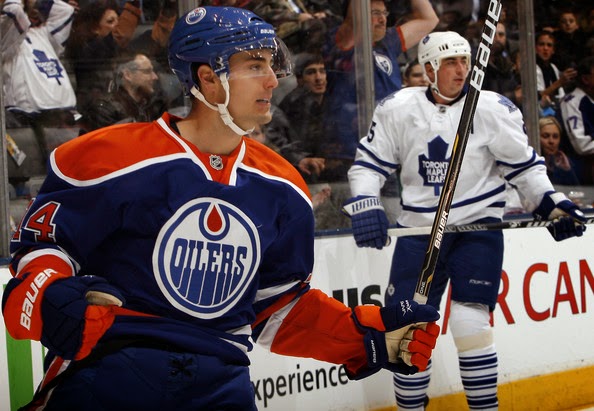 Ever since posting a thirty-four goal season during his sophomore campaign in the National Hockey League, Edmonton Oilers winger Jordan Eberle has become somewhat of a polarizing figure for many across Oil Country.

While some view the former CHL Player of the Year as an unmovable core piece, others seem to view him as an expendable part of the equation. There are those who feel the former Regina Pats standout has only started to scratch the surface as an NHL player.

The chemistry he has formed with fellow $6 million men Taylor Hall and Ryan Nugent-Hopkins is undeniable, as the trio continues to improve and form one of the finest young lines in the game today. Unfortunately for the side wearing Orange and Blue, that line appears to be the only one capable of holding their own on a nightly basis.

While others look at him as nothing more than complimentary piece who can put the puck in the net but offers little else when it comes to helping this team win hockey games. This portion of the fan base view #14 as the piece general manager Craig MacTavish should seriously consider shipping out of town in order to improve the roster in other areas. An interesting thought but there is one major issue with that line of thinking.

Considering the amount of trouble this group has had scoring goals over the last handful of years, moving the guy who has led this team in goals twice in the last three years and registered a team leading seventy-eight during that same time frame, may not be the best of ideas. MacT could be forced into moving a significant piece of the rebuild to change the complexion of the group but it seems unlikely the Regina native will be the guy he moves out.

You rarely if ever hear a negative word said about the twenty-three year old and the organization clearly views him as a cornerstone moving forward. The four names we continually hear come out of this GM’s mouth as being next to untouchable are Eberle, Hall, Nugent-Hopkins and defenceman Justin Schultz. Barring some sort of massive overpayment from a desperate organization, none of these guys are going anywhere.

With that said, the talented winger will need to take a step forward with his consistency in order to start earning his hefty pay cheque. Now a twenty-eight goal/sixty-five point campaign is nothing to sneeze at, as it actually placed Eberle thirtieth in league scoring. Some nice numbers indeed but the former twenty-second overall selection suffered through a number of goal-less droughts in 2013-14.

He went nine straight without finding the back of the net from October 22nd to November 9th, had a pair of six game dry spells (December 13th- 21st and February 1st – March 1st) and three four game runs in which he was unable to light the lamp. Add those all together and you have thirty-three games of extended time in which your top sniper wasn’t doing what he is being paid to do. While nearly every player goes cold at some point during a season, this was a little more than that.

Now part of that was due to Eberle playing much of the year with a couple of nagging injuries and Dallas Eakins’ almost obsessive need to juggle his top two lines, that doesn’t change the fact he was far too streaky of a scorer. While he did produce points on regular basis two of his scoring lulls did turn into a pair of five game pointless streaks. In comparison, Hall was never held off the scoresheet for more than two consecutive games and that happened just six times throughout the season.

That said, the Oilers #4 is one of the finest offensive weapons in the entire NHL and while Jordan Eberle is not at that same level, he has managed to work his way into the fabric of this group. Next year will be year number five for the former Team Canada World Junior hero and the time to start producing on a far more consistent level has arrived.
Posted by Oil Drop at 12:23:00 pm