Torres is at his finest in the post-season 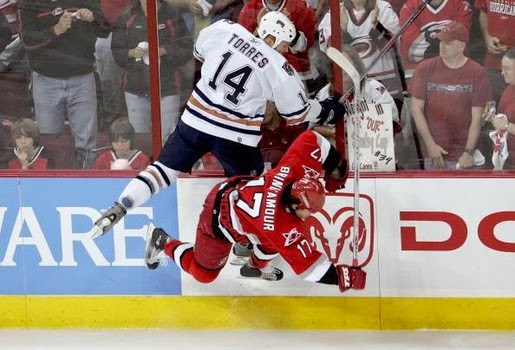 It has been six years since Raffi Torres was a member of the Edmonton Oilers and while he has had his fair share of ups and downs since leaving the Alberta Capital, the former fifth overall pick of the New York Islanders will always hold a special place in the hearts of fans across Oil Country.

Some view the now thirty-two year old as nothing more than a head-hunter who looks to destroy guys with open ice hits, be them of the clean or dirty variety, but those people tend to ignore everything else he brings to the table for a team come playoff time.

While he never turned out to be the offensive weapon many felt he could become when the Isles selected him with their first round pick in 2000, Torres has always been and continues to be a very useful NHL player.

He has never been better or come close to duplicating the level of play he produced during the Oilers surprising run to the 2006 Stanley Cup Final but as he has shown during the first three games of the San Jose Sharks opening round series against the Los Angeles Kings, the twelve year vet is more than capable of playing a key role on one of the best teams in the National Hockey League.

At this stage of his career, the native of Toronto, Ontario is nothing more than a 9-12 minute a night bottom six forward. That said, every time the Sharks #13 hits the ice everyone in the rink knows it. Be it scoring game-tying and winning goals as he did in the opening two games against the Kings or throwing his trademark bone-crushing hits, he still has an impact on games.

Despite playing a total of just sixteen games for San Jose to close out the 2013 campaign, eleven regular season and five in the post-season, general manager Doug Wilson wasted little time to re-sign him to a three extension in the off-season. While he was suspended six games during last year’s playoff for knocking out former Oilers teammate Jarret Stoll with what was just a punishing hit, the organization clearly liked what they saw.

While 2013-14 has been a complete write-off for the former Brampton Battalion standout, seeing action in five of the Sharks eighty-two contests courtesy of a wonky right knee, he has done nothing but produce during his time in Black and Teal. If you combine the regular season and playoffs, Torres has scored eight timed and posted fourteen points in twenty-four outings. No wonder Mr. Wilson inked him to the sort of deal he did.

Now is $2 million a year a tad rich for a fourth line winger? Probably but if he can stay healthy, Raffi Torres is still a serviceable third line guy who is viable option as a secondary option on the man advantage, even on a team as deep as the San Jose Sharks. That in itself should tell us something about the both the player’s ability and willingness to do whatever is necessary to help his team win hockey games.

The two-time twenty goal man proved in 2006 he was capable of lifting his game to another level when it mattered most and he continues to do the same thing eight years later. Lord knows the Edmonton Oilers could use a player or three like Mr. Torres on their roster in the here and now.