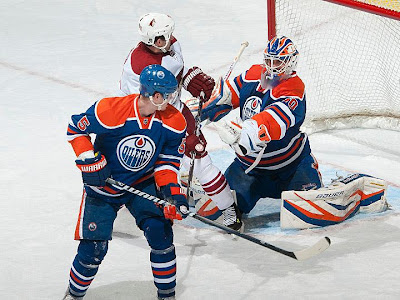 As has been the case whenever these two teams have squared off this season, the opening period was about as exciting to watch, as my living room wall drying after a fresh coat of paint. For all the winning Dave Tippet coached teams do, they are arguably one of the worst teams to watch in the entire league. While they do have their share of skilled players, one would never know it by watching them play on a nightly basis.

Thankfully, it would be the Oilers who would open the scoring just before the seven minute mark of period two and give the game some life. After the Coyotes decided to graciously turn over the puck just inside their own blueline, Ryan Jones and Eberle suddenly found themselves in on a two-on-one break. The Oilers leading scorer would make no mistake, scoring one of his easiest goals of the season courtesy of a nice little touch pass from the recently promoted Jones. The goal gave the game what it desperately needed and it would only take the Oilers a matter of seconds, to make it a two goal bulge.

After Ladislav Smid missed the net with a booming point shot, the puck caromed around the end boards back to Jeff Petry at the opposite point and his quick wrist shot was neatly deflected by Ales Hemsky and forcing Smith to make a nice stop but the talented winger was in perfect position to deposit the rebound and give the Oilers a 2-0 lead. The goal was only the sixth of the season for the highly skilled Czech and ended a twelve game goalless drought. Two goals in thirty-three seconds clearly put the home side in the driver's seat...or so it seemed.

The score would remain the seem until Oiler killer, Ray Whitney, managed to give Phoenix life. After another fire drill like session by the Oilers in their own end, the puck squirted free and simply found its way over to the diminutive winger and he buried his twenty-second of the year and third against Edmonton. That made it a one goal lead with just over twelve minutes to go but it was a lead that should have been upheld against a team like Phoenix, that is far more comfortable when in front, then coming from behind.

With just over two and a half minutes to play, Smith absolutely stoned Lennart Petrell with a brilliant glove save on the doorstep and on the ensuing play, Jeff Petry made an ill advised pinch along the Phoenix blueline, which allowed the Coyotes to break out with numbers. Not surprisingly,  it would be two more former Edmonton Oilers that would make their former club pay for their miscue.

Gilbert Brule found Raffi Torres with a lovely little pass, that the rugged winger ripped past a helpless Devan Dubnyk to even things at two and send this one to overtime. The goal was the fourteenth of the season for the former twenty-seven goal man and marked the sixth time he has scored against his former team in just sixteen games, after being shipped off to Columbus following the 2007-2008 season in a deal for oddly enough, one Gilbert Brule.

Twenty-seven seconds into the extra session, Keith Yandle was properly assessed a kneeing penalty for taking down Hemsky at the Coyotes blueline but the Oilers did nothing with the power play opportunity and clearly missed the presence of their leading power play marksman in Taylor Hall. Just as Yandle came out of the penalty box, the Phoenix defenceman was sent on his way just outside his blueline, after another poorly timed pinch from an Oiler D man, this time the culprit being Corey Potter. The rearguard looked like a man possessed heading up ice, as he took it to another gear and broke in all alone on Dubnyk. The Oiler netminder made the stop but Yandle was being hooked by Shawn Horcoff leading up to the shot and was awarded a penalty shot but Dubnyk was up to the task, as he stoned the the talented blueliner.

Neither side could find the OT winner over the final two minutes, which meant it was time for a shootout. Despite a rather lackluster opening twenty minutes, this one turned out to be a rather entertaining and wide open affair as Phoenix edged the Oilers 42-38 on the shot clock after sixty-five minutes of play.

Jordan  Eberle would be first to shoot and though he beat Smith with what has become one of his trademark backhand moves in the shootout, he was unable to beat the post. The speedy Mikkel Boedker was next and with a full head of steam, he easily beat Dubnyk with a lightening fast deke to his backhand, to give the visitors the lead. Sam Gagner was next and the struggling centre promptly moved in and wired a shot over Smith's glove hand with a quick release to even things at one a piece. That meant Ray Whitney would be next and he scored yet another big goal, easily beating Dubnyk with a beautiful backhand move, that the Fort Saskatchewan native tends to use frequently in the skills competition. That left rookie Ryan Nugent-Hopkins the task of having to score to extend this one but Smith would not break, as he denied the youngster and earned his team two crucial points in their push to secure a playoff berth.
Posted by Oil Drop at 7:17:00 am