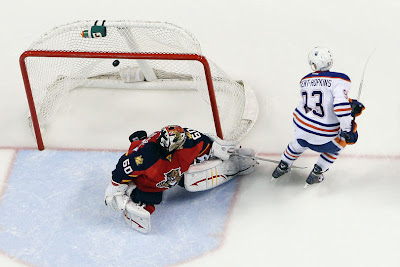 With Edmonton playing their second game in as many nights and Florida coming off a disappointing loss to the lowly Carolina Hurricanes on Wednesday evening, one would assume that the Panthers would come out looking to bury the twenty-ninth placed Oilers. Instead, Florida came out flat and Edmonton was still finding their legs, in what was an uneventful and scoreless opening twenty minutes.

The Oilers wasted little time in period two, jumping out to a early  1-0, as Ryan Jones continued to make the most of playing on the team's top line. While the hard working forward has struggled over the last half of the season, he still finds ways to contribute on the scoresheet. Edmonton caught a break early on, as they broke out on a three-on-two rush and Jordan Eberle manged to find Jones with a nice little touch pass, that the former fourth round selection promptly fired past Jose Theodore, giving the visitors the lead.

It would take the Panthers all of three and a half minutes to get that one back, as defenceman  Jason Garrison continued his torrid scoring pace, to tie things up at one. The third year blueliner made a timely pinch and was rewarded with a nice feed from Tomas Fleischman, that the Florida D man slipped between the wickets on Dubnyk.

That was all the offence we would be treated to during regulation but both Theodore and Dubnyk made some timely saves in the final period to ensure this one reached overtime. While neither side found the back of the net in the extra session, the Panthers had the best chances. Stud young defenceman Dmitry Kulikov hit the post early in OT and Kris Versteeg had a clear cut breakaway in the dying seconds but was denied by Dubnyk's out stretched left pad that meant. That meant for the third time in their last four games, Edmonton was off to a shootout.

After both teams failed to get a goal from any of their submitted shooter list, Stephen Weiss was up next for Florida but the talented Weiss, was stopped by Dubnyk. That left the game on the stick of the Oilers rookie centre. After curiously being absent from Edmonton's six shooters on Thursday night in Tampa, the talented youngster wasted little time in leaving his mark, beating Theodore with a beautiful backhand move high to the blocker side.

The win now gives the Oilers sixty-nine points on the season and though they still sit twenty-ninth in league standings, they could potentially find themselves out of a lottery pick...if their recent winning ways continue. Edmonton is only four points back of the twenty-fifth placed Lightning but have just seven games remaining in their season.
Posted by Oil Drop at 4:41:00 pm