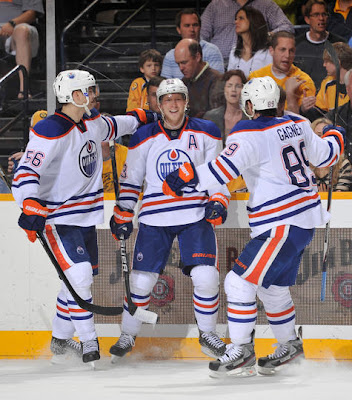 Ales Hemsky was undoubtedly the star of the night upfront but it was the Oilers tough guy, who would open the scoring just past the midway point of the opening frame. Darcy Hordichuk banked in his first of the year, off defenceman Kevin Klein skate and past a helpless Rinne, to give the visitors the early lead. The goal was Hordichuk's first as an Oiler and first in ninety-one games

Five minutes later, Hemsky would score his first of the night on what was a bit of a controversial play. With Sam Gagner and the talented Czech winger breaking in on a two-on-one break, Gagner drove to the net and bumped into Rinne just as Hemsky's shot sailed past the Preds netminder and into the Nashville net. The home side were pleading for goaltender interference but the goal stood as Gagner was clearly pushed into the crease by forward Martin Erat.

Edmonton  generated very little in the opening twenty but were in complete control...until they decided to hand the Preds a goal, after giving the puck away in their own end, in the dying seconds of the period. David Legwand was the beneficiary of the Oilers poor decision making and knocked in his seventeenth of the season, with seven seconds left on the clock.

Luckily, Edmonton was able to restore their two goal lead just twenty-eight seconds into period number two and in the process, brought an end to the Predators All Star goaltender's night. Rinne bobbled Ales Hemsky's harmless looking point shot and the Oilers winger was allowed to drive to the net, collect his own rebound and chip his second of the night over the fallen netminder.

Just over five minutes later, Ryan Jones would make it a three goal lead, when the hard working winger knocked in his fifteenth of the season, on the power play. Predators backup goalie Anders Lindback made a nice stop off Jeff Petry's initial point blast but Jones was in perfect position for the rebound. That should've put this one to bed but the Pred turned it up a notch and gave Edmonton all they could handle the rest of the way.

They thought they had cut the lead to two, when Shea Weber's point shot found its way through Dubnyk and into the Oilers net but the goal was immediately waived off because of goaltender interference. In what was another controversial call, forward Patric Hornqvist was whistled down for bumping into the Oilers netminder on the lip of the crease and while the contact was minimal, it did interfere with Dubnyk's ability to make the stop. In my mind, it was the right call.

Apparently the officials were doubting their own call, as the promptly put the Preds on the power play and within seconds, had them on a two man advantage. While Dubnyk and his penalty killers held the fort for the first part of the man advantage, the damn eventually broke and Hornqvist potted his twenty-fourth of the season, after Dubnyk made a splendid pad save seconds earlier.

A minute and a half later, Hemsky would respond with a lovely individual effort for his third of the night and claim his first career NHL hat trick. The hard charging winger picked up a loose puck at the centre line and simply blew past two Nashville players and flipped a quick shot over Lindback to restore the Oilers three goal cushion. The three goal performance gives Hemsky all of nine goals on the season but he has now scored four in his last two games.

Edmonton took their three goal lead into the third period, despite being out shot 25-14 over the opening forty and it was a trend that would only get worse in the final twenty. Nashville would fire nineteen shots Dubnyk's way in the third period and the Oiler goalie was up to the task, making many timely stops and the occasional highlight reel save.

Legwand managed to poke in his second of the night just before the five minute mark, after Edmonton was again caught running around in their own end. The Preds continued to press and force the Oilers to turnover the puck all period long but were unable to sneak another one past the Edmonton netminder. Their best chance coming courtesy of a breakaway opportunity for Erat but Dubnyk easily turned the Czech wingers attempt aside.

With under two minutes to go, Hemsky would chipped the puck over the Nashville defence from the deep in the Oilers end and found Gagner, who would put this one to bed with his sixteenth of the season into an empty net.
Posted by Oil Drop at 10:33:00 am