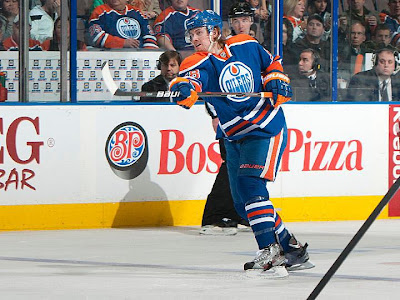 Since roughly the midway point of the season, one could easily argue that Petry has been the Oilers best defenceman, with the one exception possibly being Smid. Coming into this season, you would not have found a single solitary soul that follows this team or knows anything about the game of hockey, who would have told you that Petry and Smid would be the Edmonton Oilers top two defencemen and that is exactly what the pair have become.

As previously mentioned, Smid has improved by leaps and bounds and has become the club's top shutdown guy. Though no one expected the Czech rearguard to turn around his game as quickly as he seemingly has, many felt he had the skill set to ultimately fill the role he is currently in. Petry's case is something completely different.

Most felt the former second round pick had the potential to develop into a top four puck moving defenceman, who would chip in with some points on the power play. Considering what the young man has managed to turn himself into, those expectations now seem a little low. He is no longer a one dimensional player and now contributes in all areas of the ice.

Heading into the season, I was part of the large group who felt that leaving Petry down in Oklahoma City would have been the best thing for the then twenty-three year old. However, the lingering injury issues of Ryan Whitney coupled with some poor play from others during training camp, Jeff found himself on the Oilers roster to start the season.

In the early going, the youngster saw his fair share of ice time but much like last season, he looked to be in over his head. While he showed little problem transition the puck up ice, at times he was a nightmare in his own end. He constantly took himself out of position and routinely gave up the puck in his own end. To make matters worse, Petry seemed uncomfortable when it came to dealing with the physical side of the game and almost seemed to shy away from contact. None of these things came as a big surprise and hence why in my mind, a full year in OKC would have done him a world of good.

Edmonton's blueline started dropping like flies through November and December and a funny thing started to happened to Petry's game. As he was forced into playing big minutes in all situation, you could see his game improving. Instead of compounding the problem of playing too many minutes by making more poor decisions, Petry went the other way. The talented rearguard finally started to slow the game down and let it come to him. While he still had his moments, he clearly started to figure things out and by the end of December, he was among the team leaders in ice time.

Through the first three months of the season, the backend was carried by the pairing of Smid and Tom Gilbert, who had both been outstanding from game one against the Pittsburgh Penguins. Unfortunately for the Oilers, Gilbert was knocked out of action in the team's first game of the New Year against the Chicago Blackhawks with a knee injury. What was a tough break for Gilbert, marked a pivotal point in Jeff Petry's season and career, as the twenty-four year old was given the keys to the car.

Since that fateful day on January 2nd, 2012, Petry has not played under twenty minutes in any game and on most nights, is the team leader in ice time. It's almost as though, the switch went off in Petry's head once he was given more responsibility. He went from being almost timid, to now using his 6"3" , 200 lbs frame to punish opponents on a regular basis and has drastically cutback on his errors. He has now become the team's best puck mover and is constantly joining in on the rush, giving the club's highly skilled forwards an option on the attack, that has frankly been missing.

Petry and Smid are now the Oilers top shutdown pairing and with Petry suddenly adding a physical element to his game, the duo have become a handful for most teams to handle on a nightly basis. While not a true number one pairing at this stage of the game, they are not far off and have greatly exceeded expectations since being put together.

One area that Petry has surprisingly not been given much of an opportunity at, has been on the man advantage. This makes his twenty-two points in sixty-six games look that much better. One would think come next season, Petrydefenceman that can put up close to forty points a season, while playing major minutes in all situations, is someone you would consider a top pairing guy. Which is exactly what this organization so desperately needs.
Posted by Oil Drop at 9:41:00 am