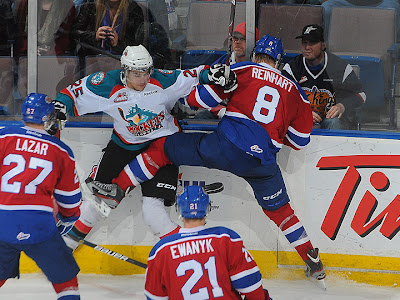 Despite having the previous seven days off, Edmonton peppered Rockets starter Jordon Cooke, with sixteen shots in the opening frame, yet it was Kelowna who would opening the scoring and take a 2-1 lead into the first intermission.

Dylen McKinlay put the visitors in front, just under nine minutes in, with his fifth of the season to give the Rockets the early advantage. The Oil Kings would get that one back, courtesy of gorgeous three-way passing play, that Henrik Samuelsson buried for his seventh of the season. Not surprisingly, the goal game with Edmonton on the man advantage, as the Oil Kings continue to punish teams with one of the top power play units in the league.

The Rockets would restore their lead in the final minute, as Zach Franko slid home his seventh of the campaign, past Laurent Brossoit, making it two goals on five shots for visitors.

Edmonton would tie it up early in the second, as Michael St. Croix scored his 100th career WHL goal, on what else, but another Oil Kings power play. Foster picked up his second helper of the night on the goal, giving him 200 points in his career. A memorable goal indeed but one that did little to slow down the Rockets.

For the third straight time, Kelowna would jump back in front, as Tyson Baillie's unassisted marker made it 3-2, heading into period three. Unfortunately for the Rockets, they would not get another puck behind Brossoit and the Oil Kings were just getting started.

Klarc Wilson would even things up at three a piece, after Mitch Moroz did all the dirty work, before finding Wilson for second his of the year, less than five minutes into the final frame. Edmonton would than take their first lead of the night, just under four minutes later, thanks to a brilliant individual effort from Wruck.

The veteran Oil Kings winger, intercepted a pass out of mid-air and proceeded to undress the Kelowna rearguard, with a lovely little toe-drag, before beating Cooke for his fourth of the season and sending Rexall Place into an all out frenzy.

Samuelsson would put this one to bed with his second of the night, into an empty net, giving Edmonton their first three game winning streak since the opening week of the season.

The Oil Kings won't have to wait long to try and stretch their streak to four, as the take on Vancouver Giants on Sunday afternoon, closing out what could potentially be, a rather successful five game homestand.
Posted by Oil Drop at 12:25:00 pm