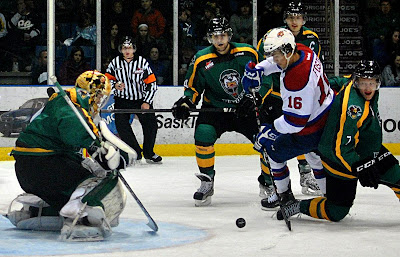 Edmonton was kicking off their six game road trip and got off to a great start, as Henrik Samuelsson sent a laser over Siemens shoulder, giving the Oil Kings the early advantage and the feisty Swede his ninth on the campaign. They would double their lead before the period was out, as Dylan Wruck converted a lovely feed from Michael St. Croix, giving the visitors a two goal advantage heading into the first intermission.

After blowing a chance at breaking the goose egg on a early second period two man advantage, Prince Albert would finally get on the board thanks to Chance Braid sliding a shot through netminder Tristan Jarry, that the Oil Kings starter would love to have back. The goal did little to slowdown the visitors but they were unable to restore their two goal cushion.

Prince Albert would reward their netminder with two third period goals. Anthony Bardaro would knock home a rebound early in the third to tie things up two, before Jarry would allow his second softie on the night, badly misplaying Jonas Knutsen's wrister from just inside the Oil Kings blueline.

It was the Siemens Show the rest of the way, as the soon-to-be twenty year old robbed St. Croix with a brilliant pad stack with just under three minutes to play and than took it to another level, with jaw dropping cross-crease goal mouth pad stack to stone Cody Corbett in the dying seconds.

The loss brought the Oil Kings four game win streak to an end and started off their six game road trip on a sour note. Edmonton will not have to wait long to try and right the ship, as they pay a visit to the Swift Current Broncos on Saturday evening.

Recently acquired defenceman David Musil made his Oil Kings debut on Friday night and while it was nothing to write home about, the towering blueliner looked  solid playing alongside Keegan Lowe.
Posted by Oil Drop at 2:05:00 pm