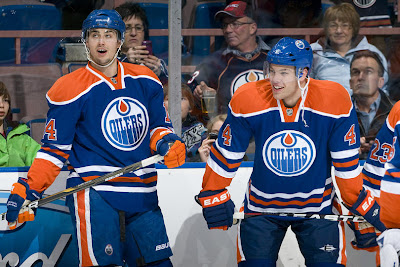 To put things into perspective, it has been seven and half long months since Oiler fans last saw Hall on an NHL ice surface...and it was not a memory that they remember fondly. We all remember the former first overall selection being absolutely destroyed by Calgary Flames defenceman Cory Sarich, in the opening shift of the latest round of the Battle of Alberta. That game took place on March 16th and ten days later,  Hall was shutdown for the year and scheduled to have season-ending shoulder surgery and he hasn't been seen since. Indeed, it has been a very long time.

Now playing the Houston Aeros is not the same as going up against their provincial rivals, for now, it will have to do. With the Oilers #4 about to be added into the mix, one has to wonder if he will find himself re-united with his Edmonton linemates, in Jordan Eberle and Ryan Nugent-Hopkins, or will coach Nelson look to spread the wealth throughout his lineup. The safe bet would be on Hall finding himself alongside his good buddies...at least to start.

Considering the former Windsor Spitfires standout has been out action for such a long time, one would think the organization would like to see him hit the ground running and that is far more likely to occur with #14 and #93 by his side. What will even more interesting to see, is what the Barons decide to do with their power play, which has been downright lethal during the early portion of the 2012-2013 campaign.

With defenceman Justin Schultz quarterbacking the man advantage from the point, the Nuge doing what he does on the half-boards, Eberle being Eberle, Teemu Hartikainen playing the role of pest to perfection and Magnus Paajarvi looking very comfortable with Schultz on the point, where exactly does Hall fit?

Come Friday night, he will probably find himself on the second unit but that won't last long. Meaning Paajarvi will ultimately become the sacrificial lamb. While the organization's decision to bring back veteran Ryan Smyth will make it very difficult for either one of Hartikainen or Paajarvi to crack the big club, whenever that might be, if the feisty Finn continues to show chemistry  with Edmonton's talented core on the man advantage, it may be next to impossible for the Oilers brass to leave the kid down in OKC.

Having said that, come Friday night all the attention will be squarely on Taylor Hall. Does he need to go out and make an immediate impact? Not at all but with the kid's mental make-up being what it is, you can bet on him trying to do just that. From the fans standpoint, they will be just fine with seeing on of their favourite players back on the ice and doing what he does best.

Indeed, Friday night can't come so enough for Taylor Hall, the Edmonton Oilers or their fans.
Posted by Oil Drop at 11:43:00 am