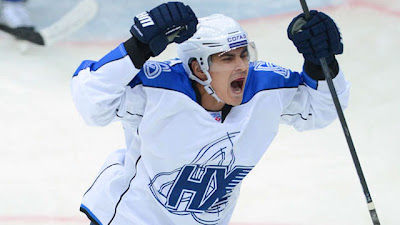 After having already won Player of the Week honours for his jaw-dropping debut with the Oklahoma City Barons, Schultz made it two for two on Thursday afternoon, after being named the CCM/American Hockey League Player of the Month. In the Barons seven October outings, the Oilers talented blueliner, picked up points in every game and currently leads the entire AHL in scoring with twelve points and sits in a tie for third, with six goals.

To say the twenty-two year old his impressed in his professional hockey debut, would be a massive understatement. While many were hoping the time down in the AHL would help the highly touted prospect to adjust to the pro game, the move has been almost seamless for the Kelowna native. Not only has he found instant chemistry with partner Martin Marincin, as the duo have quickly become Todd Nelson's go-to-pairing, but he looks right at home playing with his soon-to-be NHL teammates, in Ryan Nugent-Hopkins and Jordan Eberle.

Schultz has looked outstanding running the OKC power play from the point and has collected six of his twelve points with the Barons on the man advantage. When it comes to the Oklahoma City power play, one can only imagine what this group will produce in the coming weeks, as Taylor Hall prepares to make his American Hockey League debut tonight, against the Houston Aeros.

As far as Yakupov goes, the 2012 first overall selection had bit of a rough ride to start in the Kontinental Hockey League but has been on an absolute fire of late. After being briefly banned by the IIHF from playing any games in the KHL, due to a ridiculous dispute over his transfer agreement with the OHL's Sarnia Sting, the talented Russian needed a little time to adjust to his new surroundings.

Though he missed a handful of games due the transfer agreement issue, he was also a healthy scratch for a couple. Fast forward just over a month later and Yakupov is one of the hottest  players in the KHL. He currently sits in a tie for sixth in goal scoring with ten, despite playing just thirteen of .Neftekhimik Nizhnekamsk twenty-two games.

To no one's surprise, Yakupov has scored a few highlight reel goals but has made sure to celebrate all ten of his goals in style. While the nineteen year-old has already rubbed some the wrong way, with his tendency to celebrate every goal he score as if it were his 50th of the season, I find him rather refreshing. It has been some time since this organization has had a player that a) likes to show-boat  a little and b) can back it up on the ice.
Posted by Oil Drop at 8:17:00 am