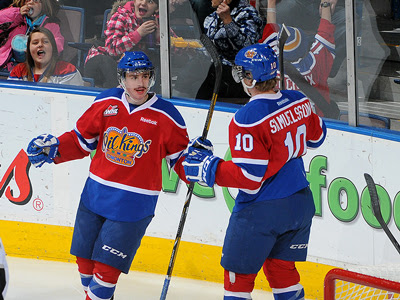 After dominating the Prince Albert Raiders on Saturday night and coming away with an overtime loss, Edmonton were hoping to come out of the gate quickly. The shot clock was again heavily in their favour but they manged to sneak only one puck behind Broncos starter Eetu Laurikainen.

Surprisingly, the goal would come with the Oil Kings on the power play, as Dylan Wruck's shot deflected off Legault and past a helpless Laurikainen. The goal ended a twelve game regular season drought for the Edmonton native, who had last lit the lamp back on March 7th against the Moose Jaw Warriors.

Legault wasted little time in potting his second of the night, banging home a rebound, after Curtis Lazar was stoned by Laurikainen with a great pad save. Edmonton had gone four straight outings without a goal on the man advantage and had not scored two in the same game since October 27th.

Swift Current would cut the lead in half before the second period was out, courtesy of Zac Mackay's bank shot off a down and out Laurent Brossoit. The Oil Kings netminder easily handled defenceman Reece Scarlett's point shot but somehow seemed to lose site of the puck and his surroundings. It was a goal that Brossoit would love to have back and one that gave the Broncos hope heading into the third.

Edmonton carried the play over the opening forty minutes and held a 34-18 advantage on the shot clock but Swift Current pushed hard in the third looking for equalizer. Brossoit made up for his earlier blunder, making a handful of timely stops, to secure the victory and improve his club's record to 14-5-2-2 on the season.

With the win, the defending Western Hockey League champs moved back to within one point of the Calgary Hitmen for top spot in the division and will have the next couple of days off, before returning to action for a pair of games over the weekend.

Edmonton will play host to the Moose Jaw Warriors on Friday night and conclude their current four game home stand on Saturday evening, when the take on the Medicine Hat Tigers.
Posted by Oil Drop at 8:44:00 am