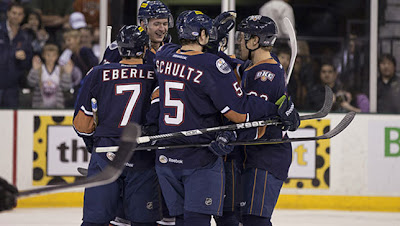 Hall led the charge on Wednesday night with a three point effort, while Jordan Eberle, Ryan Nugent-Hopkins and Justin Schultz chipped in with a couple of points each, as the Barons stretched their winning streak to three, with a 6-4 win over the Texas Stars.

Oklahoma wasted little time in kicking off their seven game road trip in style, as Eberle potted the icebreaker inside the opening two minutes of action. The Oilers leading scorer knocked home his seventh of the season, burying a rebound behind Cristopher Nilstorp and giving the Barons an early lead.

Despite falling behind, the Stars would rebound for three goals in fifteen minute span, taking a two goal lead into the first intermission. Former Oilers defenceman Cam Barker would get the Stars level with his second of the season but it would be a short-handed marker from Colton Sceviour and a power play goal from Jordie Benn, that would put the Barons behind the eight-ball.

To their credit, Oklahoma would respond with a run of their own, scoring four times in just over eight minutes, to regain their lead after forty minutes of play. Two quick goals from Teemu Hartikainen and the recently recalled Toni Rajala, would get the Barons back on level terms and Rajala his first career American Hockey League goal.

Just under three minutes later, the big boys would take over and to no one's surprise, Schultz would be the one to put his team back in front. Shortly after the former Universty of Wisconsin standout snapped home his ninth of the year, Hall would make it a two goal bulge, ripping home his fourth in eight games. Just like that, a two goal deficit had suddenly been turned into a comfortable lead.

Texas came out firing to start the third but Yann Danis stood tall, keeping the Barons out in front by a pair. Danis would finally relent under the Stars consistent pressure, as Antoine Roussel would score his side's second shortie on the night, making it a one goal game. Unfortunately for them, the comeback would fall short, thanks to an ill-timed penalty from Barker and timely power play goal off the stick of Martin Marincin. That sealed the deal and improved the Barons record to 9-5-1-1 on the season.

With his three point effort, Hall has now put up nine points in his eight games in the American Hockey League and already finds himself seventh in team scoring. With each of his linemates collecting two more points against the Stars on Wednesday night, Eberle remains in second spot in league scoring with twenty-one points in sixteen games, while Nugent-Hopkins sits in fourth with nineteen.

Despite being all of sixteen games into his professional career, Schultz continues to lead the way on the scoresheet. With twenty-three points on the season, the former second round pick not only leads all American Hockey League defencemen in scoring but also sits atop the AHL scoring race. Not too shabby for a twenty-two year old rookie.

The Barons will now have the next couple of days off before resuming their road trip this weekend, as they pay a visit to the top team in the Western Conference, the Charlotte Checkers. Oklahoma City will be looking to close the six point gap between the two sides in the standings, as they face-off against the Checkers on Saturday evening and follow that up with a Sunday afternoon tilt, to wrap up the mini-two game set.
Posted by Oil Drop at 2:29:00 am