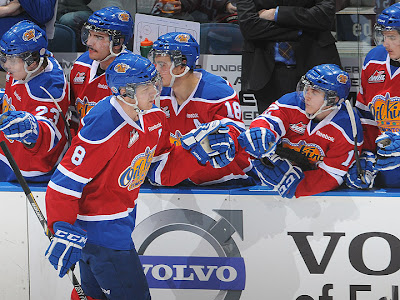 Edmonton continued their recent run of dominating their opposition on the shot clock, this time to the tune of 40-23, in easily disposing of Toronto Maple Leafs blueliner Morgan Rielly and the rest of the Warriors. Captain Griffin Reinhart scored the eventual game winner early in period two and Henrik Samuelsson pushed his point streak to five, picking up two helpers on the night.

For the second consecutive game, the Oil Kings scored a pair of power play markers en route to their fifteenth win of the season. Netminder Laurent Brossoit continued his stellar run, picking up his eleventh win on the year and improving to 5-1-1 for the month of November, with a sparkling .933 SV% and an eye-popping 1.84 GAA.

Michael St. Croix opened the scoring midway through the first, firing home his team-leading eighth power play goal, to give the Oil Kings the early advantage. Moose Jaw would tie it up early in the second, courtesy of Tanner Eberle but Reinhart would restore the one goal advantage and from that point on, it was all Edmonton.

T.J. Foster, Keegan Lowe and Brandon Baddock would closeout the scoring for the Oil Kings, as they now prepare to take on the Medicine Hat Tigers on Saturday night. With Edmonton playing on back-to-back nights, look for head coach Derek Laxdal to give his starting netminder the night off and turn to backup Tristan Jarry to face the Tigers.

While he has only started two games during the month of November, the third year puckstopper has been outstanding all year long. In seven starts, the Delta, B.C. native has posted a modest 4-3 record but owns a .935 SV% and a minuscule 1.58 GAA.  With Edmonton not scheduled to play again until Wednesday night, in Kootenay, it would be rather shocking to not see Jarry in between the pipes on Saturday night.
Posted by Oil Drop at 2:52:00 am