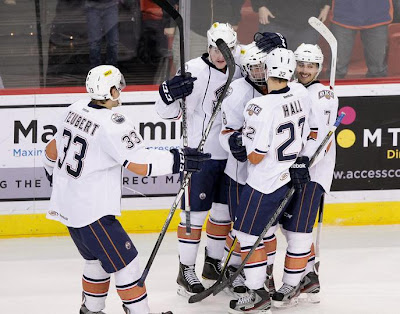 Ryan Nugent-Hopkins lead the way with a pair of goals and an assist, while Jordan Eberle chipped in with another three helpers and Justin Schultz notched his eighth of the season, as the the Barons made it a perfect weekend, with a 5-2 victory.

Taylor Hall collected two more points in the win, giving the Oilers star winger six points in his first seven games in OKC and defenceman Taylor Fedun scored for the second consecutive night, as the young blueliner continues to impress.

A late third period boarding major to Oklahoma City defenceman Alex Plante during Friday night's tilt would set the tone for the re-match, as Milwaukee came out looking for a pound of flesh. To Plante's credit, he was more than willing to answer the bell, as he dropped the mitts not once but twice on the night. Not surprisingly, the opening twenty minutes featured three fights and a parade of penalties.

Just as they had the previous night, OKC would fall behind but the Barons would respond with two goals before the period was out. Schultz would tie things up, with yet another seeing-eye point shot on the power play. Just over three minutes later, RNH would score his first of the night, neatly tipping home a perfect feed from Hall behind Admirals starter Jeremy Smith.

They would extend the lead on an early second period power play, courtesy of an outstanding feed from Magnus Paajarvi to a pinching Taylor Fedun. Milwaukee would get that one back just past the midway point of period two, keeping them within streaking distance after forty minutes.

The Admirals were handed a glorious opportunity to get back on level terms, as Anton Lander was given a delay of game minor, but it would be the Barons who would capitalize. After working the puck out of his own end and up the ice on the penalty kill, tough guy Dane Byers manged to fire a shot on net that Smith misjudged. The Milwaukee netminder spilled a monster rebound into the slot, where a hard charging Curtis Hamilton was waiting to tap home his second on the year and restore OKC's two goal cushion.

Nugent-Hopkins would cap off another solid performance, sliding home his second on the night and seventh of the season, into an empty net. The three point night moved RNH into a four-way tie for third spot in league scoring. With seventeen points in fourteen games played, the Nuge only trails his two teammates in the AHL scoring race. Schultz continues to lead the way with twenty-one points on the season but Eberle inched a little closer on Saturday night and sits only two points back, with nineteen.

With the weekend sweep over the Admirals, Oklahoma City has vaulted to second spot in the South Division and find themselves in fifth place in the Western Conference standings. Having gone 3-0-1 over their last four, the Barons will now head out on a seven game road trip.

The trip kicks off in Texas on Wednesday night and see the team play five times over a ten day stretch. In a rather odd bit of scheduling, OKC than have the following seven days off, before closing out the trip with a pair of games in San Antonio, on December 8th and 9th.
Posted by Oil Drop at 8:15:00 am