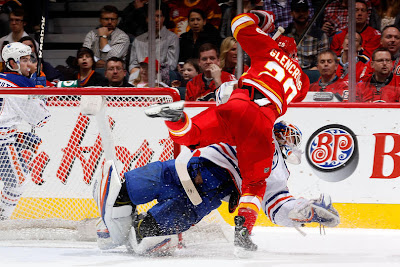 There was no doubt who was the hungrier team in the opening round of the 2013 Battle of Alberta, as the Calgary Flames powered their way to what was a rather convincing 4-3 victory, over the Edmonton Oilers. Lee Stempniak led the way upfront with a goal and two assists but it was Jay Bouwmeester who ran the show on this night. The big man chipped in two points and was an absolute tower on the Flames backend.

Calgary caught a bit of a break early in the first, as Mikael Backlund appeared to push both the loose puck and Devan Dubnyk, for his second of the season. After watching referees Tom Kowal and Greg Kimmerly struggle badly during Thursday's game against the Los Angeles Kings, the Oilers were not amused with the non-call from the same duo, on what looked to be goaltender interference.

Darcy Hordichuk would make things worse, taking a bone-head cross-checking penalty in his first shift of the season, that led directly to Bouwmeester's first of the year. While the goal came seconds after Hordichuk's minor expired, it was basically a power play goal. That was the last time the Oilers tough guy would see the ice, in what had to have been a disappointing debut.

Schultz would wrist home a late power play marker, courtesy of a great screen from Shawn Horcoff, to pull Edmonton within one but Calgary wasted little time restoring their two goal cushion. Curtis Glencross would bury a beautiful feed from Jarome Iginla, just three minutes into period two, as Jeff Petry was caught puck watching, instead of picking up the incoming Glencross.

Despite creating next to nothing at even strength, Edmonton would climb back to within one, thanks to yet another power play goal. Eberle would wire a laser past Miikka Kiprusoff, after undressing Cory Sarich with a ridiculous little move, for his second of the season and giving the Oilers hope.

However, Calgary would respond with a power play goal of their own before the period was out. Stempniak would finish off a lovely three way passing play between Bouwmeester and Jiri Hudler, restoring the Flames two goal lead, heading into the second intermission.

Sam Gagner would score in the final seconds to make it 4-3 but Edmonton could barely gain position in the offensive zone, over the final twenty minutes. The Flames were at their swarming best, keeping the Oilers to the perimeter until the dying second of regulation.

The loss drops Edmonton to 2-2 on the year, as they continue their Jekyll and Hyde routine. They have yet to lead a game in regulation time and continue to struggle to create offence at even strength. The Oilers have scored six of their ten goals on the man advantage and two more with Dubnyk pulled for an extra attacker. Meaning through four full games, Edmonton has scored all of two goals with both sides playing five-on-five.

While it is still relatively early in the season, perhaps the time has come for head coach Ralph Krueger to pull out the ol' blender and mix up the look of his top six forwards. With the top two lines receiving the bulk of ice time at even strength, the adjustment needs to be made within that group and not the bottom six forwards.

Sure, it would be nice to have the bottom two lines contribute something offensively but at the end of the day, their top players must produce consistently at even strength, for them to have any hope of competing for a playoff spot.
Posted by Oil Drop at 7:04:00 am