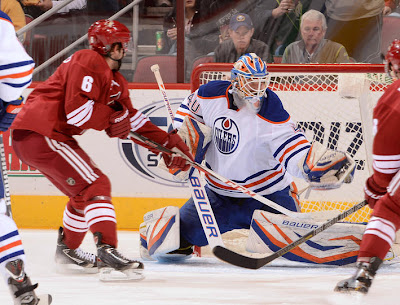 An overtime power play winner off the stick of Nail Yakupov and another stellar performance from netminder Devan Dubnyk, helped the Edmonton Oilers sneak past the Phoenix Coyotes  2-1 in Wednesday night NHL action.

Dubnyk made twenty-seven stops in earning his fourth victory of the young season, while the talented Russian capped off what was a rather uneventful outing, by potting his team leading fourth of the season. The win leaves the Oilers with a perfect 3-0 mark in the extra session, beating both the Coyotes and Los Angeles Kings in overtime, and edging out the Vancouver Canucks in a shootout.

In what has become the typical Coyotes vs Oilers game in recent memory, neither side was capable of generating much of anything, partially due to what appeared to be some downright awful ice conditions at Jobing.com Arena. Without question, it was easily the dullest opening forty minutes of hockey Oilers fans had endured this year.

Lucky for both them and Ralph Krueger's crew, winger Lennart Petrell decided to bring his "A" game on this night. The rugged Finn not only manged to give Edmonton what was just their second in game lead of the season, with his first period ice breaker, but also became the third Oilers player to score an actual even strength goal.

While the stat sheet will show this team has now scored five times during five-on-five play, two of those came in the final minute of games, with Dubnyk on the bench for an extra attacker. The goal also marked the first time someone inside the the club's bottom six, contribued on the score sheet.

The goal was your typical greasy goal, with Petrell chipping home his fifth in Oilers silks, after some relentless work  on the cycle from Sam Gagner and Ryan Smyth. After being rather invisible during the opening five games of the schedule, # 94 finally put together a productive evening, as he and Petrell were force for the entire sixty minutes.

From that point on, it was "grind the game to a complete halt" hockey at its finest. Nothing against the Coyotes, as few teams can match their work effort and tenacity on the puck but watching Dave Tippett's crew do their thing, is tough to take.

Outside of coming out and seeing blueliner Oliver Ekman-Larsson make playing defence in the National Hockey League seem about as the easiest thing in the world, one can understand why fans in the desert find it hard to get overly excited about a team that has had more than its fair share of success in recent years.

Gagner wasted a glorious opportunity to give the Oilers an insurance marker, beating Chad Johnson with a great wrist shot but seeing his shot on goal clank off the crossbar. Chances were few and far between. Leaving the Oilers with the slimmest of leads heading into the third period and the Coyotes starting to take over the time of possession.

Dubnyk was called upon to make his first real tough stop of the night, stoning Antoine Vermette on  a clear-cut breakaway, with a brilliant blocker save, after the Coyotes centre was sprung on a ridiculous stretch pass from Ekman-Larsson.

Phoenix carried the play for much of the period and were finally rewarded for their hard work, with a last second power play marker from Nick Johnson...courtesy of an absolutely dreadful interference call on Gagner, with just under two minutes to go.

However Edmonton would have the last laugh, as Vermette was whistled down for high-sticking Jordan Eberle, midway through overtime and leaving the game in the hands of what was the league's top power play.

After struggling to even gain possession during any of their three opportunities on the man advantage during regulation, the Oilers would get the job done on chance number four.

The quartet of Ryan Nugent-Hopkins, Eberle, Gagner and Justin Schultz were given first crack at playing the role of hero but after doing much of nothing, Krueger turned to unit number two.

The make shift grouping of Ales Hemsky, Taylor Hall, Yakupov and Ryan Whitney manged to finally gain possession in the Coyotes end and allow Hemsky to patiently run things. Seconds later, Hall's incoming shot ricocheted off Whitney's glove and over to a wide open Yakupov, who swatted home the game-winner.

Was it a masterpiece? God no but come April 28th, all that anyone will care about is how many points the Edmonton Oilers end up with, not how they got them. A recipe that has worked all to well for Mr.Tippett and his band of hard working men.
Posted by Oil Drop at 7:23:00 am