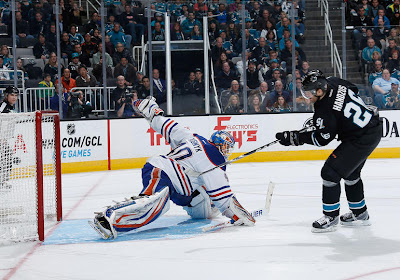 Funny what a difference twenty-four hours and an opponent willing to play the game can make. After sitting through what was easily the dullest game of the year on Wednesday night in Phoenix, the Edmonton Oilers and San Jose Sharks managed to treat hockey fans to one helluva tilt.

Shootout goals from Dan Boyle and Michal Handzus helped the Sharks keep their perfect season intact, edging the undermanned Oilers 3-2, despite yet another outstanding performance from netminder Devan Dubnyk. Sam Gagner and Taylor Hall scored in the losing effort, pushing their individual point streaks to seven straight and moving Edmonton into first place in the Northwest Division

After being absolutely embarrassed by the San Jose in the season opener just over a week ago, Edmonton came out with something to prove against the league's last undefeated team. To their credit, they pushed the Western Conference leaders from the opening face-off and gave them all they could handle.

While Dubnyk made a couple of huge saves early on, including a shorthanded breakaway stop off Martin Havlat, the Oilers carried the play during the opening twenty minutes. A far cry from what fans at Rexall Place had witnessed some nine days earlier.

Despite the promising start, the Sharks still opened the scoring in period two, striking twice in a span of thirty-nine seconds, both coming courtesy of Edmonton turnovers. Defenceman Ryan Whitney coughed up the puck, just outside the blueline, handing Logan Couture a free lane to the Oilers net and the talented youngster made no mistake, burying a laser past Dubnyk.

Seconds later, Ladislav Smid would fan on his attempted pass to Jeff Petry, this time just inside the blueline, allowing Joe Pavelski to pick up the loose puck and wire home his fourth of the year. Just like that, they were down a pair and head coach Ralph Krueger decided to call a timeout.

The Oilers new bench boss took the opportunity to not only settle his players down but also laid into them. It clearly worked, as two shifts later, the lead was down to one.

Gagner would deflect a Mark Fistric point shot, up and over Antti Niemi to make it a one goal game and stop the bleeding before it ever really started. The assist was the first point in an Oilers uniform for Fistric, while rookie Nail Yakupov also picked up a helper on the play, the first of his NHL career.

That seemed to settle Krueger's crew down, as they played San Jose even the rest of the period, giving themselves a shot heading into the third...something they wasted little time capitalizing on.

Through forty minutes, Edmonton's top line had yet to make an appearance on the scoresheet, despite what was easily the best game of the year for Taylor Hall. However, they did manage to keep the high-flying Joe Thornton line off it as well, as the two lines played head-to-head for much of the night.

Pretty impressive stuff, considering what Thornton and linemate Patrick Marleau had been doing to teams, including the Oilers, over the first ten day of the 2013 National Hockey League campaign.

The trio of youngsters would finally be rewarded for all their hard work, as Hall finished off a gorgeous passing play with Jordan Eberle, tapping home his second of the season, all of fifty-one seconds into period three.

Edmonton continued to play well and had a couple of glorious chances, one coming after Hall slipped in behind the Sharks D but Niemi was up to the challenge. Down at the other end of the ice, Dubnyk was even better, stopping a barrage of shots over the final ten minutes of play and throughout the overtime session.

It was no contest in the shootout, as Handzus and Boyle do what they seemingly always do in the skills competition of the evening. While both Gagner and Ryan Nugent-Hopkins missed the net on their attempts.

It was definitely a tough loss but one that speaks volumes about the Oilers character and their supposed question mark in goal.


Oil Notes
Edmonton were without captain Shawn Horcoff, due to a stiff neck after receiving a cheap shot from Coyotes captain Shane Doan, in the closing minutes of regulation on Wednesday night. While it does not appear to be a serious setback for the veteran centre, there is no set timetable for his return.

If the training staff were to see a marked improvement in his motion on Friday, there is the potential he could suit up for the Oilers road trip finale in Colorado on Saturday afternoon. That being said, the smart money would be on him returning to action on Monday night against the Vancouver Canucks, should all go well.

Anton Lander made his season debut in his place and the youngster was his usual dependable self, both at even strength and on the penalty kill. The talented Swede played a major role in helping Edmonton hold off the mighty Sharks power play at bay.
Posted by Oil Drop at 10:16:00 am