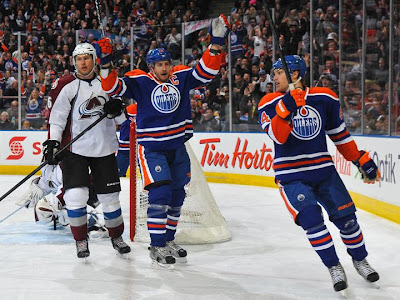 The Edmonton Oilers needed a bounce back performance, after a less than stellar outing against the Calgary Flames on Saturday night. Thanks to yet another impressive showing from the Oilers lethal power play and a solid thirty-seven save showing from Devan Dubnyk, they did exactly that.

First period goals from Ales Hemsky and Jordan Eberle set the tone, as Edmonton cruised to a 4-1 victory over the under-manned Colorado Avalanche. Shawn Horcoff and Nail Yakupov also scored on the man advantage, helping Edmonton take over top spot in the Northwest Division.

While the Oilers continued to struggle to produce any offence at even strength, they were still drawing penalties at an alarming rate. Allowing what is now the league's second best power play unit, do their thing. With their four goal explosion on the man advantage, Edmonton's power play is running at a 35.7% clip...only marginally behind the undefeated San Jose Sharks total of 37.5%.

The Oilers carried much of the play in the opening period but needed an outstanding bit of work from Teemu Hartikainen in front of the Avs net, which led directly to Hemsky's icebreaker at the 15:23 mark. After being scratched from the lineup against the Flames on Saturday night, Hartikainen returned to the lineup as a different player.

To Ralph Krueger's credit, he not only teamed him with his Oklahoma City Barons linemate in Magnus Paajarvi but finally gave the feisty Finn a look on the man advantage. Perhaps it was the spot on the PP or being re-united with Paajarvi, whatever the reason, Teemu morphed back into the player this coaching staff were hoping they were getting this season.

Jordan Eberle would make it a two goal lead, taking a lovely little feed from Taylor Hall and wiring an absolute laser under the cross-bar and behind a helpless and frankly stunned Semyon Varlamov, before the period was out. If it was anyone but Eberle, we would all be stunned at the finish but with good ol' #14...it has almost become expected.

Shawn Horcoff would make it 3-0, scoring his first season, as Hall's pass/shot bounced off the Oilers captain's skate and past an unsuspecting Varlamov. Thirty minutes in and Edmonton's power play was three for four and the Avalanche looked to be dead in the water.

Surprisingly, the Av's not only picked themselves up off the mat and fought back but were the far better team over the final thirty minutes. After having next to nothing to do over the first period and a half, Dubnyk was about to see some rubber and a lot of it.

Colorado would fire twenty-nine shots on their Oilers tender over the final period and half, including twenty-four in the third period alone. Dubnyk was more than up to the task, despite having a PA Parenteau wraparound elude him and ending his shutout bid. While he did not have to make any of those so-called "ten-bell" saves, the big man was peppered and looked in complete control throughout the night.

Nail Yakupov would close out the scoring, sliding home his third of the year into an empty net, courtesy of some hard work and a nifty pass from Sam Gagner. The goal was a nice way for the young Russian to end his night, as he struggled mightily throughout but at the end of the day, did not end up hurting his club on the ice.

The Oilers will now pack their bags and head out on their first road trip of the season, starting tomorrow night in Phoenix, against the struggling Coyotes. They will than head to San Jose to face the red-hot Sharks on Thursday night and close out the four day trek on Saturday afternoon in Colorado, against these same Avalanche.
Posted by Oil Drop at 10:47:00 am