Bryz comes up large on David Perron night in Vancouver 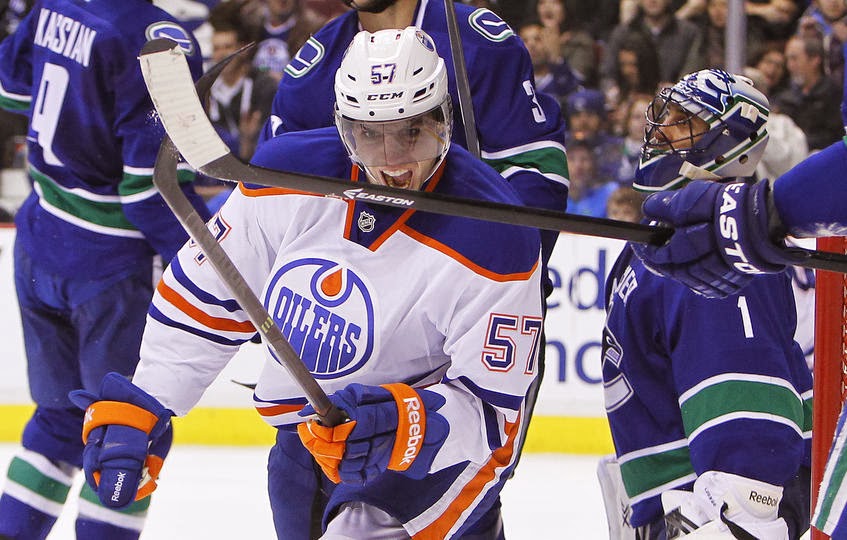 While much of the hype following the Edmonton Oilers surprising 4-2 win over the Vancouver Canucks has revolved around a hat-trick performance from forward David Perron, he was not the star of the show during Monday night’s victory.

As good as the Oilers #57 was, and he was good, netminder Ilya Bryzgalov was even better. In a year in which Oilers goalies have struggled mightily with making that big stop when their team needed it most, #80 took his game to another level against the Canucks.

There have been games in which praise has incorrectly been heaped their netminder’s way, most recent occasion being Ben Scrivens and his 5-1 over the Nashville Predators on Sunday night at Rexall Place, but last night was not one of those times.

While the former Los Angeles King was good against the Preds, too many people focus on the sheer volume of shots a goalie faces as opposed to when he makes some of those saves. With all due respect to Scrivens, the only stop of real importance he made against Nashville came late in second period off Shea Weber and even that is debatable, as Edmonton was already up by a score of 4-1.

The focus was on the thirty-four saves Scrivens made, when in actuality, he had it rather easy. The Oilers have rarely had the pleasure of trying to defend a three goal lead this season and when they have, it has generally been smooth sailing. While they may end up giving up “X” amount of shots against, the game was never in doubt.

That wasn’t the case last night in Vancouver.

Most would say Dallas Eakins’ side played one hell of an opening forty minutes and were frankly unlucky to be in a 2-2 tie heading into the second intermission and it would be rather difficult to argue that point. They had played a fairly smart road game for two periods and if not for a couple of ill-timed deflections of Corey Potter, the scoreboard could have looked completely.

Unfortunately that wasn’t the case and if not for some late period heroics from Bryzgalov, Edmonton would have actually been trailing heading into the third period. The two saves he made off Chris Higgins, on yet another awful Oilers line change, was yesterday’s “game changing moment”. Perron’s three goals were nice and all but if one of those shots found their way into the back of the net, we would be talking about another loss this morning.

Jesse Joensuu would score the eventual game-winner early in the third but Bryzgalov would come up large with a couple of more huge stops down the stretch, including a rather awkward looking but perfectly timed glove save off Dan Hamhuis. For one of the rare times this season, the Oilers won the goaltending battle in a tight game and not surprisingly, they ended up with the two points at the end of the night.

Make no mistake, David Perron was fantastic but in the end, it was Ilya Bryzgalov who was the difference.
Posted by Oil Drop at 1:21:00 pm