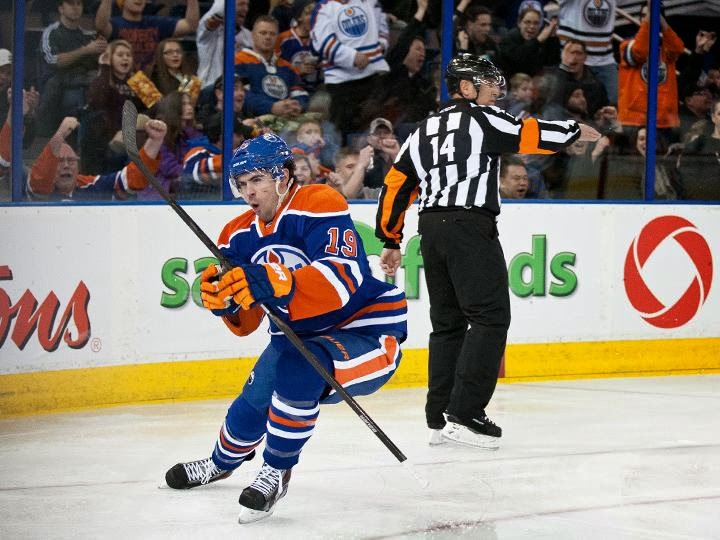 From an Edmonton Oiler fans standpoint, last night’s 5-1 victory over the Nashville Predators was what most had hoped to see from their young squad on a far more regular basis. Two point efforts from the quartet of Jordan Eberle, Taylor Hall, Ryan Nugent-Hopkins and Justin Schultz, with a goal from Nail Yakupov mixed into boot. Not too shabby.


For those old-timers in the crowd, Ryan Smyth posted a two point night of his own, including the 125th power play marker of his Oilers career…pulling him into a tie with Wayne Gretzky for second on the club’s all-time list and one shy of Glenn Anderson for top spot. It was pretty much a perfect night for everyone involved and one that was long overdue.

Ben Scrivens was busy, making thirty-four stops in picking up his first win in Oilers silks, but Dallas Eakins’ crew kept the vast majority of those shots to the outside. While the Preds may have been missing a few regulars, with many more playing but under the weather, Edmonton came out with a semblance of a balanced attack for one of the few times this year.

When I say balanced attack, I am not referring to them pushing out four “so-called” scoring lines but rather four units with particular roles. It may have taken 50+ games to get to but it appears as though Mr. Eakins has finally put together a forward group he actually appears comfortable with.

A clear cut number one line, a secondary scoring unit, followed by a bottom six that is more than willing to get down and dirty. While many questioned the addition of Matt Hendricks via the Devan Dubnyk trade, the veteran forward has allowed the rookie bench boss to change things up.

Give Eakins credit, he used a big second period lead to his advantage and rested his best players….a smart move considering they will be taking on the Vancouver Canucks on Monday night. That will be three games in four nights with a skills competition mixed in too boot.

They’re not a finished product by any stretch but at least it’s a step in the right direction. Now if only they could do something about that blueline.
Posted by Oil Drop at 9:57:00 am