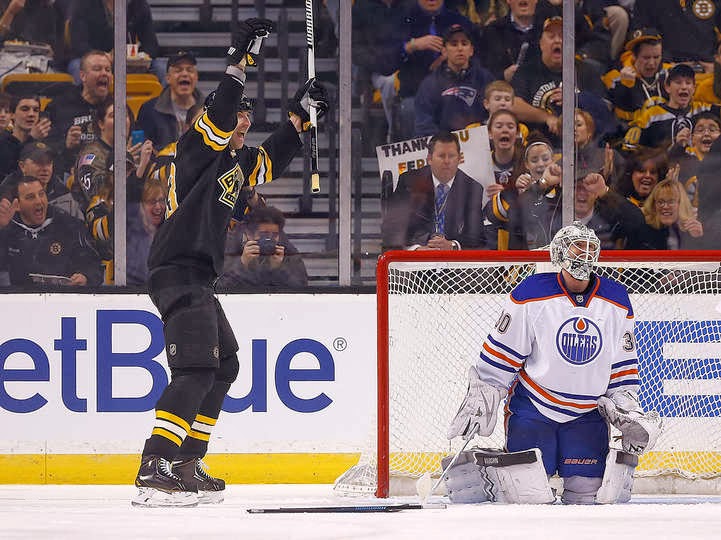 The Edmonton Oilers kicked off their pre-Olympic break four game road trip in Boston on Saturday afternoon and while the 1-0 second intermission scoreline may have hinted at this one being a close one, it was anything but. The Bruins seemed almost disinterested for much of the opening forty minutes but managed to turn it up enough over the final twenty to pick up easy 4-0 victory over the Western Conference cellar dwellers.

Netminder Ben Scrivens responded with another solid performance in between the pipes for Dallas Eakins' crew, making thirty-seven stops on the afternoon but was still saddled with his third loss in Oilers silks. Bruins backup goalie Chad Johnson had it a far easier down at the other end of the rink, blocking all twenty-two shots fired his way, in earning his tenth win on the campaign and second against the Oilers this season

Newly acquired Mark Fraser was paired with former Bruins defenceman Andrew Ference in his Oilers debut and the duo struggled mightily over the opening forty minutes of action. The former Maple Leafs blueliner saw just over twelve minutes of ice time and was used sparingly in the third period, despite leading the team in hits with five.

One would have thought after watching Scrivens set an NHL record with a 59 save performance against the San Jose Sharks on Wednesday night, Edmonton would have been raring to go in trying to pick up their fourth straight win. Unfortunately, they came out as flat as a board and created absolutely zero offence on the afternoon.

The Bruins opened and closed out the scoring with a pair of power play goals, courtesy of David Krejci and Torey Krug. while Edmonton sputtered badly on the man advantage...going 0-4 on the afternoon. As has been the case on far too many occasions this year, the power play was nothing more than a momentum killer...instead of the difference maker it should be.

At the best of times this Oilers team generally needs their PP to contribute for them to have a chance of winning hockey games but against a team like Boston, it is an absolute necessity for them to produce on the man advantage. That didn't happen and if not for some timely stops from their netminder and a disallowed second period goal, this one would have been over early in the second period.

Instead their goaltender kept them alive for as long as he could but the wheels came off in the third. Dougie Hamilton make it a two goal bulge six minutes in, banging home his wrap around attempt off Scrivens leg for his sixth of the year and Carl Soderberg would extend the lead to three on a shot the Oilers starter would like to have back.

It wasn't the best of third periods for Scrivens but considering the sheer volume of shots he has faced over his last two starts, it was only a matter of time before pucks started finding their way into the net. To put things into perspective, Edmonton has been out shot 100-49 in their last two outings. Nuff said.

It has been Men vs Boys against the San Jose Sharks and Boston Bruins and none of us should be overly surprised to see things unfold as they have. That said, with the Buffalo Sabres, New York Rangers and New Jersey Devils up next on the schedule, there is no reason for this team to not be competitive in each and every one of those games....none whatsoever.
Posted by Oil Drop at 2:39:00 pm