It pays to know Dallas Eakins 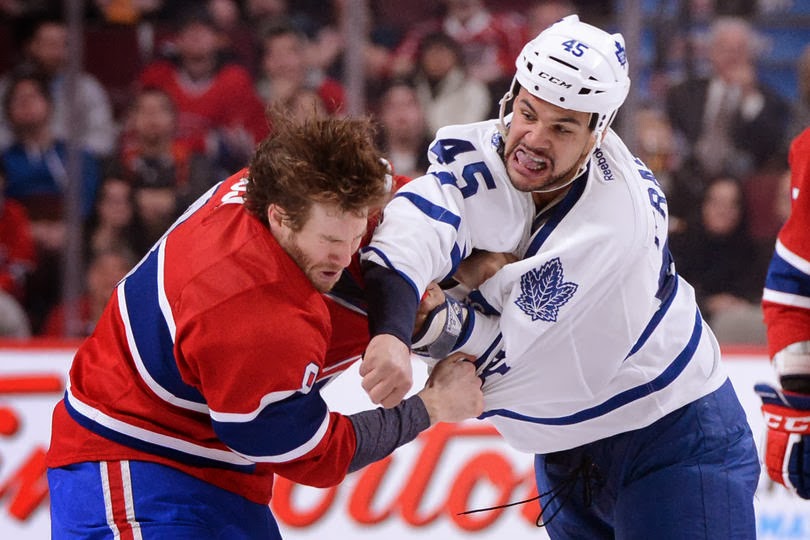 Another day and another deal involving the Edmonton Oilers and a player who had previously been coached by Dallas Eakins during his time as the Toronto Marlies bench boss. First came the free agent signings of Will Acton and Ryan Hamilton, then the trade for goaltender Ben Scrivens and today we saw the arrival of Toronto Maple Leafs blueliner Mark Fraser in exchange for the rights to Teemu Hartikainen and minor leaguer Cameron Abney.

While no one should be overly shocked to see general manager Craig MacTavish add another tough as nails player to what is by far and away the softest lineup in the entire NHL, bringing in the twenty-seven year old depth defenceman is a bit of a head scratcher. What happened to the idea of only employing guys with "puck moving" abilities on the backend?

When the Oilers rookie GM decided to ship Ladislav Smid to the Calgary Flames back in early November, much of the reasoning behind the move was said to be the Czech defender's contract and inability to move the puck up ice. Apparently, the idea was to have the likes of Anton Belov and Philip Larsen to help carry the load in his absence.

After watching the ensuing nightmare unfold as it has, MacT felt now was the time to add some sandpaper back into his mix on the backend. Now why he felt the removal of one of the few guys who actually played with any sort of edge to his game was a good idea in the first place...remains a mystery to me. That said, the ensuing result was about as predictable as predictable could be.

I am not quite sure how adding a depth defenceman to a roster that already features far too many depth defeneman is going to help improve this team in any way shape or form. While some were unhappy with the organization's decision to trade away former starting goaltender Devan Dubnyk to the Nashville Predators in exchange for Matt Hendricks, the veteran forward at least serves a purpose...despite what those unhappy campers might have you believe.

However, when it comes to Fraser, the same really can't be said. The former third round pick has appeared in just thirteen games for the Maple Leafs this year, after  being a regular during 2013. The fact he can't crack Toronto's defensively challenged group says all you need to know...though Edmonton's backend is arguably worse.

While Eakins described the bruising defenceman's style of game as "mean" during his Friday afternoon media scrum,  something the Oilers could definitely use, his limitations as a player are painfully apparent. The guy can skate pretty well for a big man but has next to no offensive ability. He doesn't move the puck well and routinely puts himself in tough situations, in search of that "bone-crushing" hit.

Not sure about all of you but doesn't that sound like your typical one dimensional Oilers D man? Make no mistake, Fraser will battle hard in front of his goalie and drop the mitts whenever called upon but outside of that, what can he bring to the table? My guess...his fair share of trips to the penalty box.

Now may not be the time for Craig MacTavish to try and make good on his promise of delivering "bold moves". Rushing into a move is rarely the way to go and more often than not, it comes back to eventually haunt an organization...which is something no one wants to see happen.

With that said, the time for continually adding spare parts for the sake of doing so should have ended long ago.  Either make a splash or move some parts for pieces that could possibly be used to help improve this roster next summer. Sorry but trading for a player that isn't a good fit today or tomorrow, makes zero sense.
Posted by Oil Drop at 10:01:00 pm