Oilers Foursome could turn into something very special 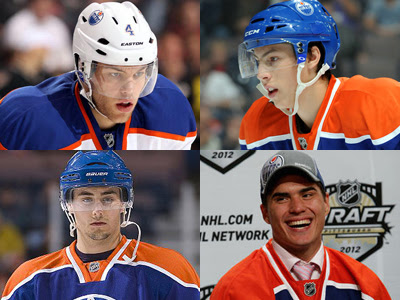 Leading up to the 2012 Entry Draft, I like most columnists/bloggers, wrote my far share of articles surrounding what the Edmonton Oilers might do with their first overall selection. In my mind it was a rather easy decision. Unless they were floored by some sort of crazy offer, you take Nail Yakupov.

The possibility of having what I first referred to as the "Fearsome Foursome" back in mid June, was simply too much to pass up on. In adding Yakupov to the existing trio of Jordan Eberle, Taylor Hall and Ryan Nugent-Hopkins, the catchy moniker instantly popped into my head. While the handle seems to be a nice fit, one has to wonder just how good this quartet of youngsters could become.

More often than not, you will find that fans, and sometimes media, tend to overrate prospects within in their team's organization. It's not uncommon and it happens in all sports. You could point to far more failures and busts, than you could to success stories. Yet in Edmonton, it appears as though if the Sarina Sting standout turns into the electrifying player many feel he could become, the Oilers could be headed for something very special.

Outside of Hall's injury problems during his first two NHL campaigns, the kid's development has been rather impressive. While he was somewhat easied into action early in his rookie season, it didn't take long for fans to realize why the former Windsor Spitfire winger was so highly touted. Taylor's willingness to try almost anything out on the ice and his absolute disdain for losing, made him an instant fan favourite.

He has all the tools to be a great player for a very long time and has not only shown the ability but also the want, to being "The Guy". With the exceptional talent around him, there is no guarantee Hall ends up being the highest scoring one of the bunch but it seems almost a certainty, that he will be the one wearing the "C" on his jersey. He has captain material written all over him and has already started to try and hold his teammates accountable for poor performances.

Before shutting down his second NHL campaign in mid March, due to a nagging shoulder injury, Hall had not only morphed into the Oilers best player on an almost nightly basis but he was often the best player on either side. In all honesty, as great a season as Eberle had in his second go-round of the NHL, if Taylor had not been forced out of the lineup, I have little doubt that he would have been the one to lead the club in goals, despite having missed a good chunk of time earlier in the year. Having said that, 27 goals in only 61 games, isn't too shabby.

As far as Eberle goes, it would be an understatement to say Edmonton caught a break taking him twenty-second overall in what was an impressive 2008 class. One could easily make the argument, that next to the top two selections of Steven Stamkos and Drew Doughty, the former Regina Pats standout has been the next best player, with all due respect to Ottawa's Erik Karlsson and St.Louis blueliner Alex Pietrangelo.

The Regina native has wasted little time in making a mark at the NHL level, having cracked the 75 point barrier in his second season, while displaying one of the best releases in the game. Not to mention a set of hands in tight that would revival any player in the game today. He has continued to have the knack of coming up big in clutch situations, as he did on numerous occasions playing for Team Canada.

After finishing with 34 goals last season, he looks to be only scratching the surface and should be a mortal lock to score thirty-five a year moving forward. In fact, if these four along with defenceman Justin Schultz, develop into what most feel they could, Jordan has the skill and smarts to push the forty plus goal mark on a annual basis and could easily flirt with the 50 goal plateau.

Which bring us to Nugent-Hopkins, who could arguably be the best of the bunch. To say I was surprised with the youngster's production during his rookie campaign would be a lie. I had him down for a 13 goals and 53 points heading into the season and he finished with 18 goals and 52 points. The point total were no shock but how little issue he had adjusting to the NHL game, was a pleasant surprise. He was fairly responsible in his own end from the get go and did not allow his "small stature" to become much of an issue.

In one abbreviated season, he not only became one of the best power play threats in the entire league but perhaps the premier one of the lot. Oh yeah, did I mention he just turned nineteen years old in April? Edmonton Oilers radio analyst and Oilers NOW host, Bob Stauffer, has said on numerous occasions he feels RNH has the potential to become a top ten player in the league and based on what we saw in his first kick at the can, that assessment doesn't seem to be to far off.

In Yakupov, Edmonton could have very well brought in that final piece to what looks to be a pretty impressive puzzle. While Hall is very much in your face on the ice, he is as mild mannered off it, as both Nugent-Hopkins and Eberle are in either setting. That does not appear to be the case with young Russian winger. He likes to have his fun and has rubbed some as being arrogant and selfish. In my opinion, there is no issue with a player showing personality and believing in one's abilities, as long as it doesn't get in the way of team success. In fact, I find it rather refreshing and wish more guys had the same type of flair as say Alex Ovechkin or P.K. Subban.

Those two have the game to back it up and Yakupov should be no different. The youngster will find himself playing somewhere within the Oilers top six and while he likely won't be dominant to start his NHL career, it would be shocking for him to not score at least twenty goals during his rookie season. The kid is a flat out stud and is driven to score goals. Players with that type of drive typically don't fail at this level, if anything, they tend to excel when surrounded by other skilled players.

Ultimately, no one knows what these four talented youngsters will produce in the long run. That being the case, the smart move is to never bet against talent. Which is exactly why the Edmonton Oilers look to be headed for yet another special time, in this franchises storied history.
Posted by Oil Drop at 10:46:00 am