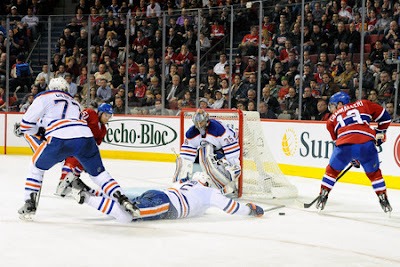 To suggest that Ladislav Smid had a breakout season with the Edmonton Oilers in 2011-2012, is like saying that Ryan Nugent-Hopkins kid wasn't bad during his rookie campaign. Without question, Smid was the Oilers best blueliner last season, as he finally started to look comfortable in his NHL skin.

In his sixth season in the National Hockey League, the twenty-six year old put it all together in '11-'12. Arguably the biggest surprise on the Oilers roster, Smid was not only a shot blocking, minute eating machine but also managed to chip in with five goals...after scoring only one, over the previous four seasons.

After sitting among the top three shot blockers for much of the year, Smid finished seventh, only fifteen back of Tampa Bay's Brett Clark  for second in the league. From Day One, the rearguard had no problem sacrificing his body, time and time again. His strong play with partner Tom Gilbert, played a huge part in Edmonton jumping out to a 9-3-2 mark to open the season, which had Oiler fans dreaming of a possible playoff spot.

As the season progressed, Edmonton started losing their fair share of games and watched as the injuries started to mount, on an almost daily basis. Through all the hardship, the one constant was the continued strong performance from the former first overall selection of the Anaheim Ducks. To make matters worse, the rugged blueliner lost his usual partner, first to injury and than to trade, when the Oilers decided to move Gilbert to the Minnesota Wild for defenceman Nick Schultz.

Surprisingly, it had little effect on Czech blueliner, as he continued leading Edmonton's backend and more importantly, allowed defenceman Jeff Petry to seemingly blossom overnight. Were there some growing pains? Sure but the pair were easily Edmonton's two best defencmen over the last half of the season.

Which brings us to the coming 2012-2013 season, whenever that might be, and what should be expected from the former ninth overall pick. With six full seasons under his belt and pending unrestricted free agency staring him in the face, one would think Smid could put together his best season to date.

With the addition of Justin Schultz into the mix and what will hopefully be full seasons from both Nick Schultz and Ryan Whitney, Smid should have far more help than he did at any point during 2011-2012. While he is far from being an "old" player, on this team, he is one of the veterans and needs to continue to take on an even bigger leadership role. Something Smid seems more than happy to do.

Ladislav still has improvements to make in his overall game, most notably being, 1) his tendency to drop to the ice and attempt to block every shot and 2) leaving opposing players in front of the Oilers net, in order to join his D partner behind it but the holes are far fewer than they were at this same time last year.

He has learned to play within himself and has finally earned the trust of the coaching staff. After being used as nothing more than a bottom pairing guy for much of Smid's first five NHL seasons, Tom Renney and his coaching staff decided to put a ton of responsibility on his plate last season and Smid responded in a big way.

In becoming this club's best shutdown defenceman, he was used regularly against the opposition's top players and looked very comfortable doing it. Funny how things can change in one calender year. Few, if any, would have believed that would have been possible in such a short period of time but #5 made the necessary adjustment and did it rather easily.

Moving forward, there is little doubt that Ladislav Smid has cemented himself a spot on the Edmonton Oilers and it sounds as thought the native of Frydlant, Czech Republic, wouldn't have it any other way. He is unquestionably one of the more popular players within the Oilers dressing room and bleeds Orange and Blue. Over the last number of years, Smid has made no secret of wanting to remain in Edmonton long term and after marrying his longtime girlfriend this summer, the time for Ladislav to sign a multi-year extension would seem to be right now.

Having just signed both Taylor Hall and Jordan Eberle to lengthy deals, General Manager Steve Tambellini would be wise to turn his focus towards getting one of the true young  leaders on this club, under contract for the foreseeable future.